I Am Sin Yee
Home English Iceman (冰封侠: 重生之门) 2014
Share
Tweet
Share
Pin
Share
Awaiting for Iceman for few months,
and finally it is showing!
Being a big fan of Donnie Yen,
how can I miss his latest movie? 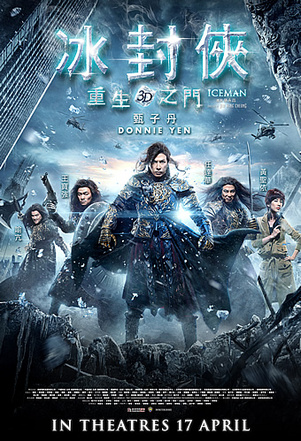 Syn﻿opsis
In 2013, funded by a mysterious financier, Squire Tang digs up three ancient icemen from the outskirt of China. They are Ying(Donnie Yen), Niehu(Yu Kang) & Sao(Wang Baoqiang). He transports the icemen to Hong Kong for further study but the vehicle involves in a traffic accident which unexpectedly defrosts Ying. Travelling 400 years in time to modern Hong Kong, Ying meets wasted May(Eva Huang) on Halloween by chance, who gives him shelter. With intelligence & hard work, Ying soon grasps the idea of modern society with the help of the internet. Living under the same roof, Ying & May gradually fall for each other. At the same time, he never forgets the injustice that frames him and seeks to correct history using the Golden Wheel Of Time…
Remember the first time I watched the trailer,
I was laughing at the battle between horse and Lamborghini~~~
For those who watched the trailer,
didn’t you think it is funny?
And I was wondering where the horse come from?
Aren’t they at the middle of highway? @@

Curiosity gave me more motivation to watch this movie.
Ah ha! Finally I know that.
And that plot is stimulating my nerves..

I bet Donnie Yen has changed to be a funnier actor in movies recently.
His speeches and acting in Iceman make me laugh a lot.
Not only Donnie Yen, the other roles are funny too!
Imagine an ancient man comes to the modern world,
and they have to adapt into the strange environment.
Ipad? TV? Internet? Even simple thing, the physical appearance…

But, this movie is not as good as I expected.
Yes, there are many laughter.
It did entertain the audiences.
But, some dialogues are rude.
They were using foul words in their dialogues.
If it is only one or two times,
I think it’s fine.
But, almost all the time they have conversations,
foul word is a must.
Perhaps, it is our recent culture,
personally think that movie should not broadcast this negative culture much?

Other than that, there are also some violent scenes.
So, if you would choose to watch with kids,
please make sure they didn’t get scared. (although it is not as scary as horror movie)

Personally think the ending is not exciting.
It is really unexpected.
Somehow I felt I was being tricked by their early dialogue.