I Am Sin Yee
Home English Cafe 9 | A Taste Of Thai @ SS17
Share
Tweet
Share
Pin
Share
Have you ever realized a new trend in Klang Valley food industry? Thai food is becoming more and more famous; especially boat noodle. A month ago, Danny and I went for Foodinker “family gathering” at Cafe 9, a Taste of Thai at SS17. 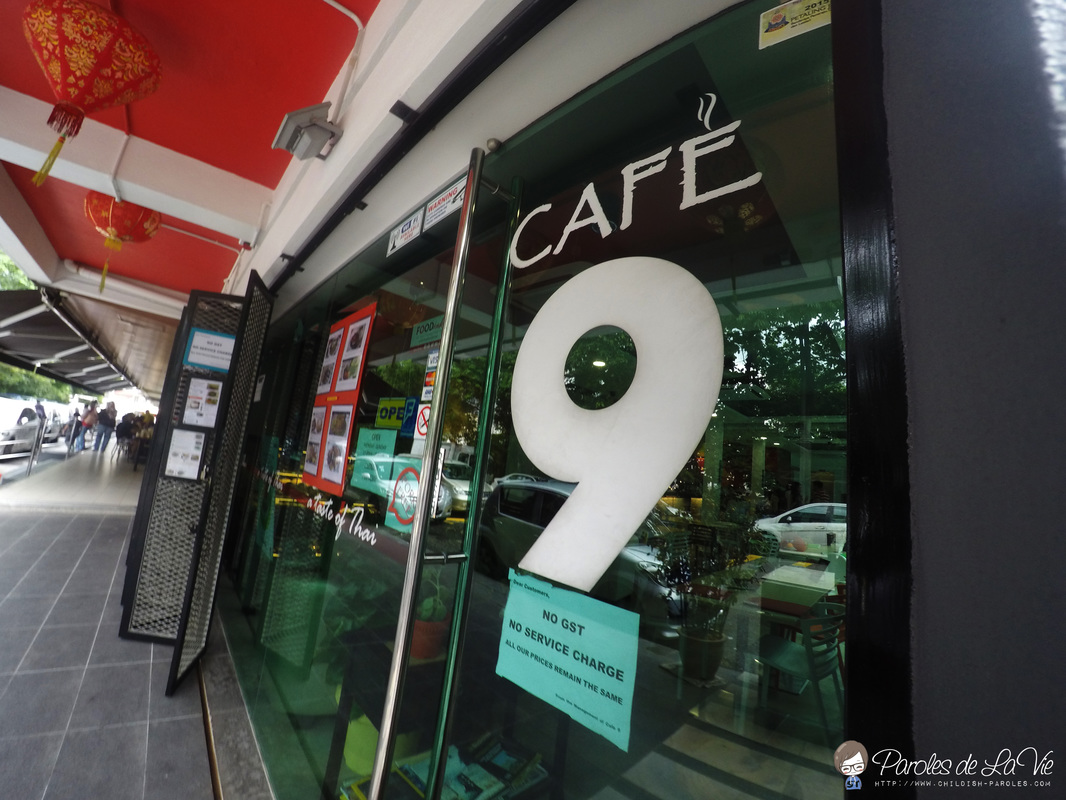 FYI, Cafe 9 isn’t an authentic Thai food restaurant, instead, the owner claimed that they are trying to use the Thai cooking style or recipe, mixing up with other cuisines. That’s why, it is called “A Taste of Thai”. Cafe 9 doesn’t have classy design; however, the simple arrangement is just cosy and relaxing. 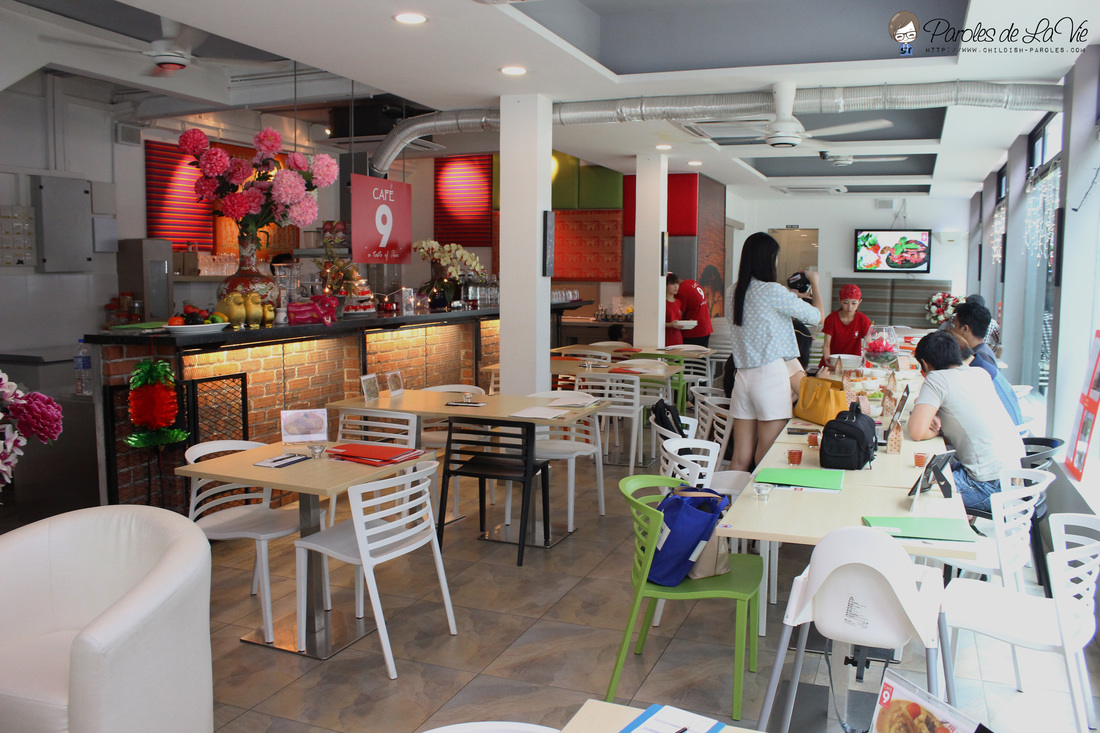 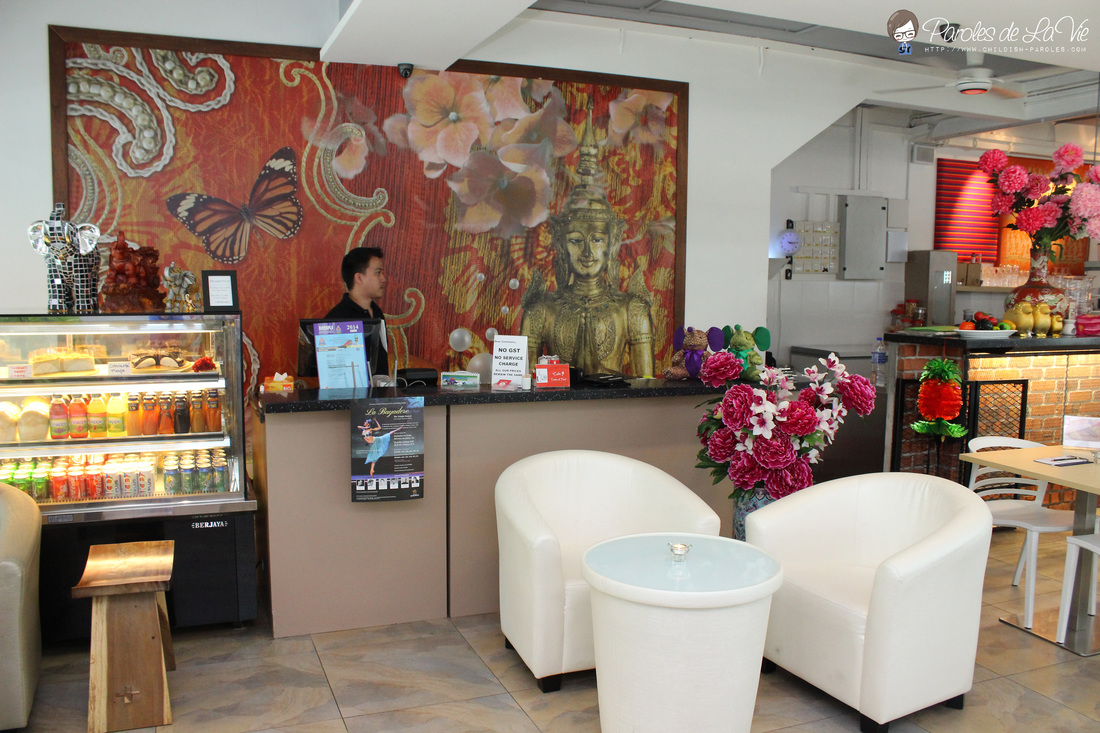 Before having the main course, we were served with Thai Pomelo Salad. It is a salad, mixed with sweet and juicy Thau Pomelo and prawns. It was quite spicy and sour at the same time, which made it a perfect appetizer. 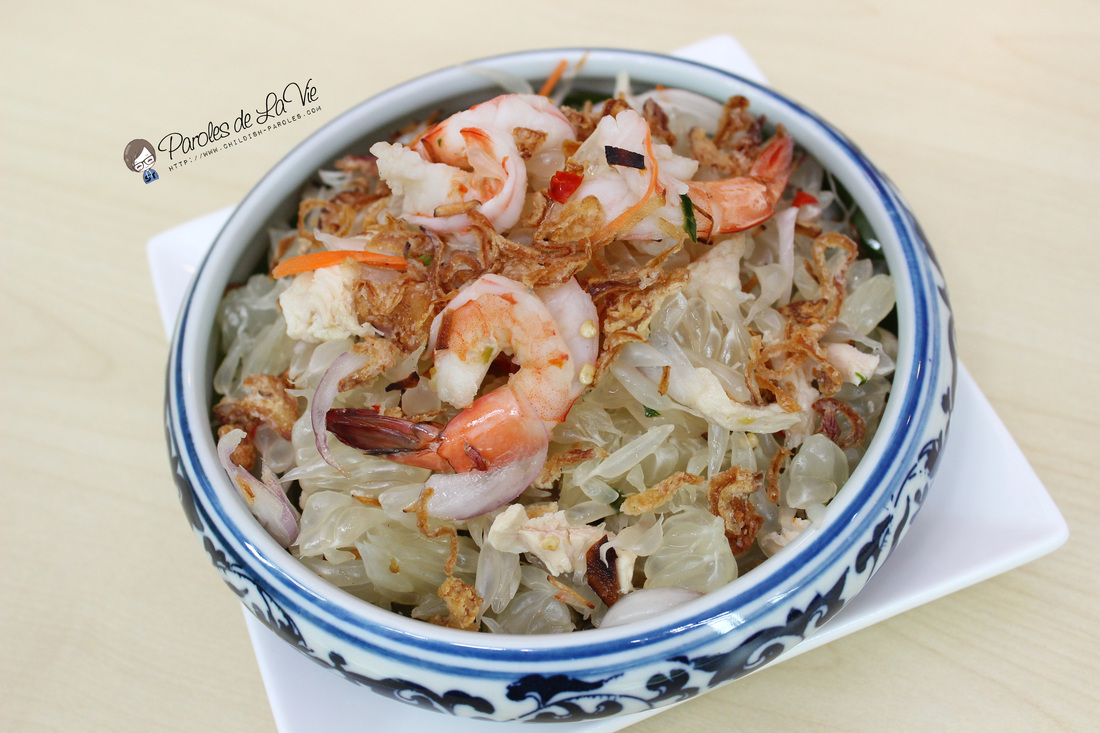 Thai Pomelo Salad @ RM20.90
Another welcoming dish we had at Cafe 9 was Thai Prawn Cake. Don’t you think it looks like a doughnut? Crispy from outside, but soft and stuffed with fresh minced prawn flesh inside. For sure, this dish must eat when it is still hot. Else, it will be less appealing. 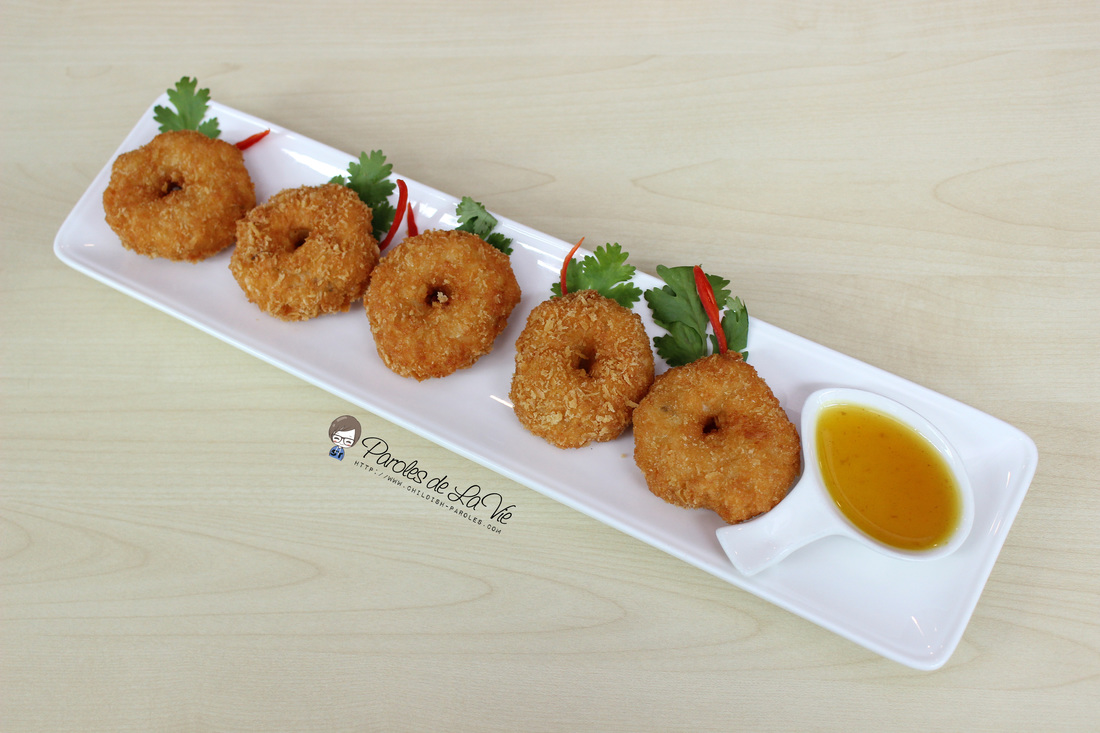 Thai Prawn Cakes @ RM18.90
Coming next was Thai Style Fried Chicken Wings. It was different from our normal fried chicken wings. The flesh was removed, mixed with vegetables such as carrot, and then stuffed back into the skin, followed by deep frying. It was boneless and soft to chill. You hardly find this dish at other Thai cuisine restaurant because it has so much works to do in order serve this dish. Imagine yourself peel off the bone from you chicken wing and stuff all things in again (make sure it is still in shape). 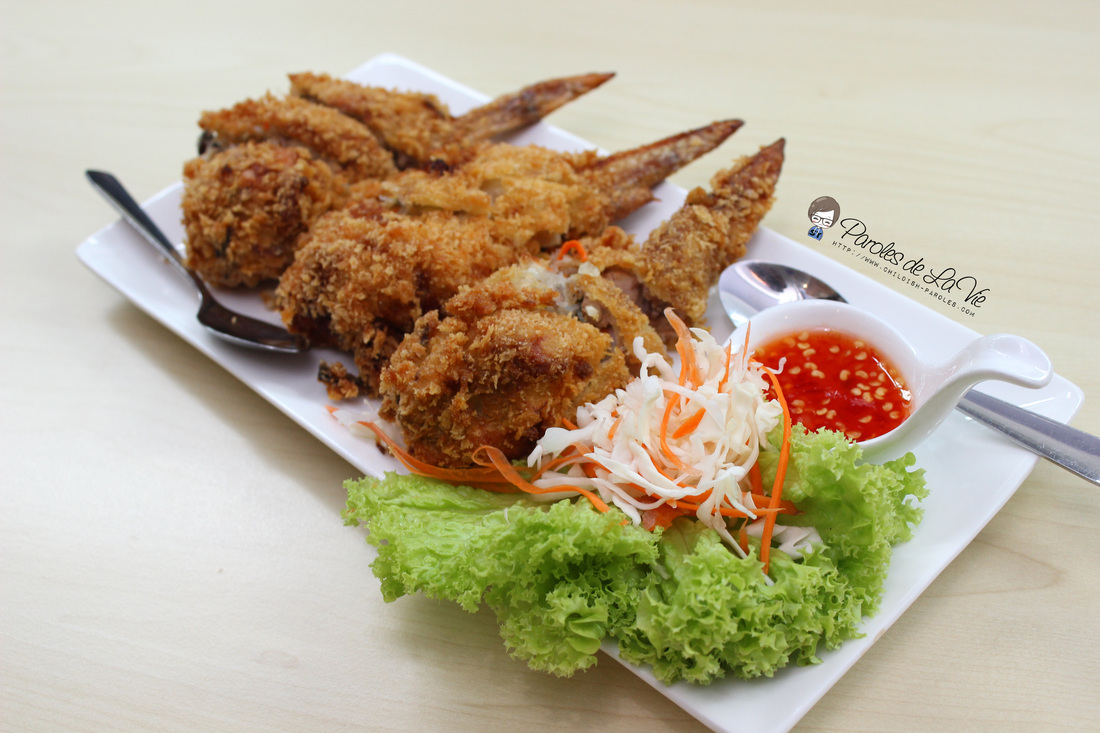 Thai Style Chicken Wings @ RM16.90
If you are a fish lover, you must try this dancing fish. It was served in two sizes. In general, small is enough for 4 persons. Thus, order it only if you are going in group. The meat was cut into bite size; thus, it was easy to share with one another. The presentation was amazing while the meat was fresh; however, it was a little dry to chew. 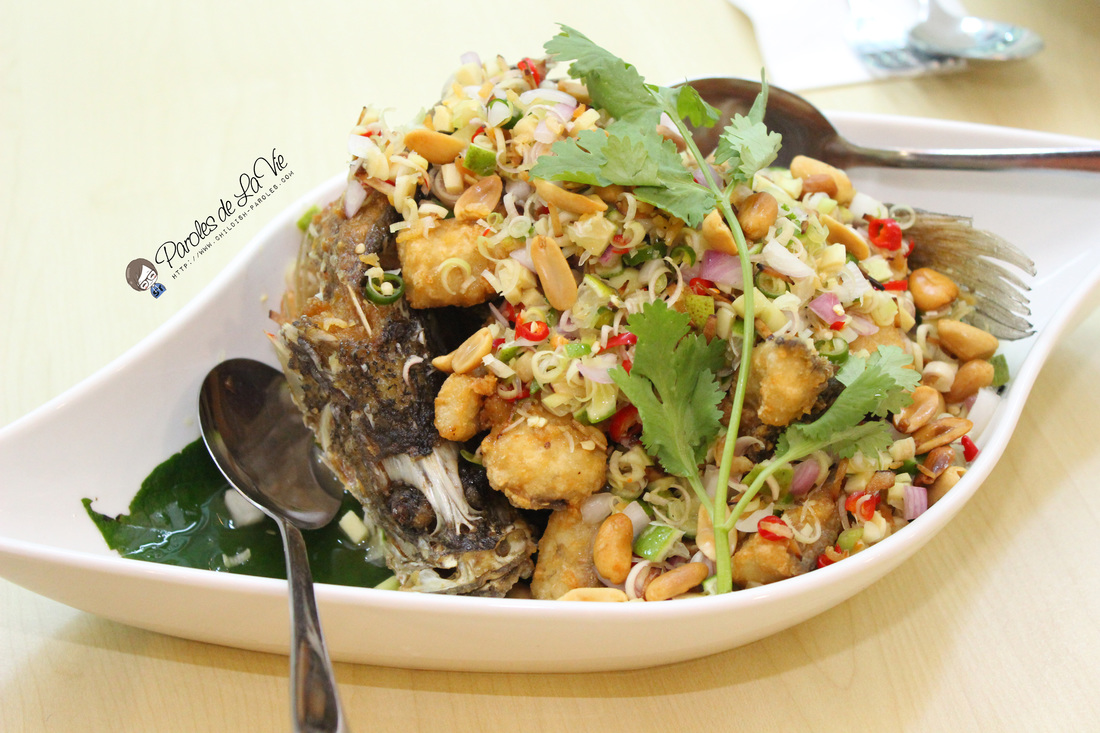 Dancing Fish –  Small (4 pax) @ RM44.90 / Large (6-8 pax) @ RM49.90
Alternatively, you can go for Beef Stir Fry. Indeed, it taste similar to Chinese stir fried beef. According to Danny, this dish was slightly oily but the meat was juicy with the black pepper sauce. 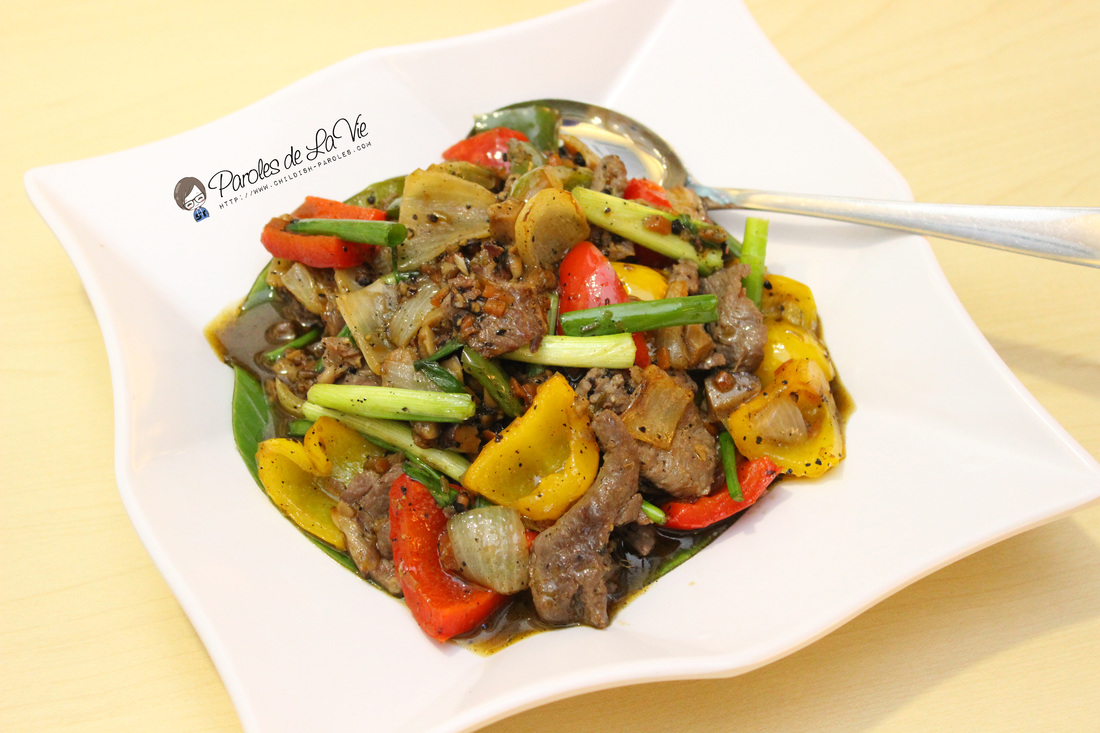 Beef Stir Fry @ RM22.90
Being a big fan of Thai kuey teow and glass noodle, I was awaiting for their different cooking on these noodles. First, it was served in dark herbal soup; one in chicken soup while another in beef soup. Both tasted similar, it was light, you may like to add some spices on it. 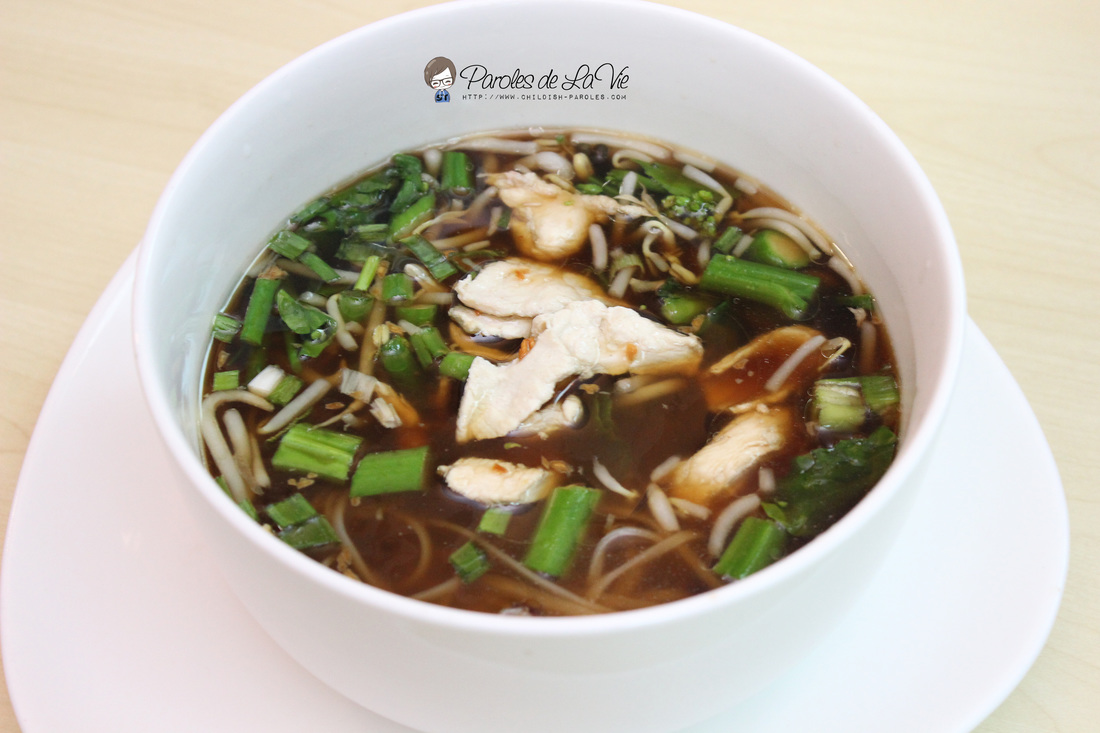 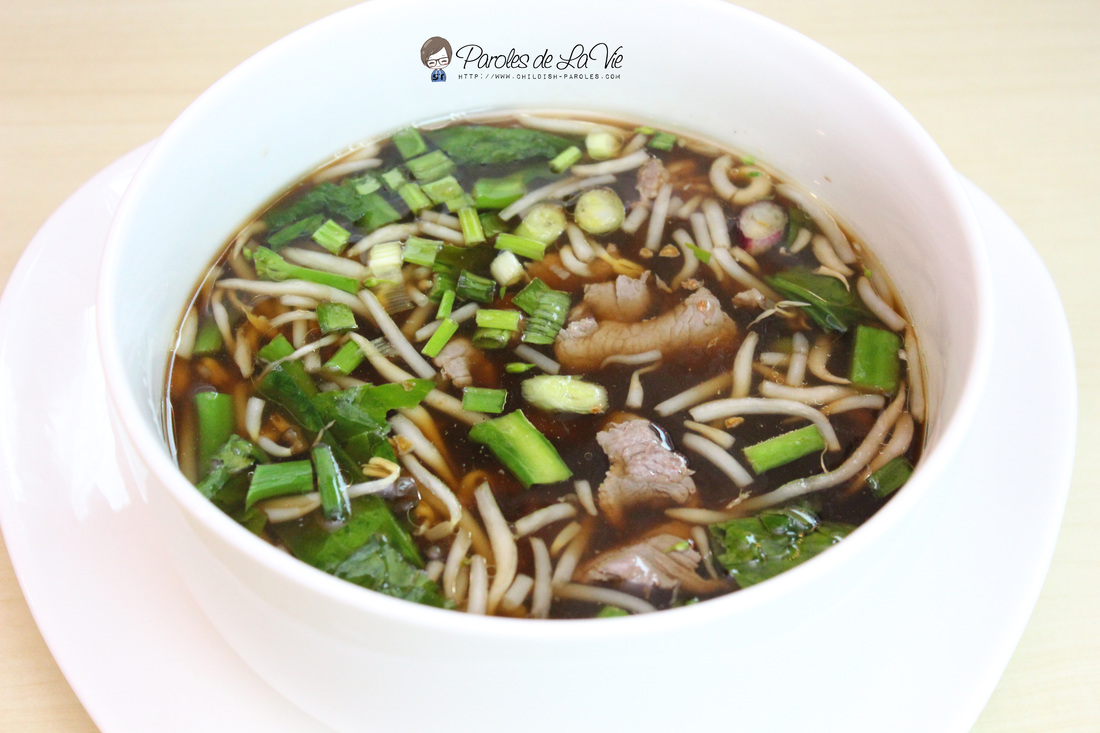 Authentic Dark Herbal Beef Soup Noodle @ RM15
Instead of soup, I preferred to have fried kuey teow. Similar to the soup base kuey teow, this fried kuey teow also served in two sauce; light sauce and dark sauce. I find both tasted similarly too. However, I went for the dark sauce because I am not a bean sprout lovers. 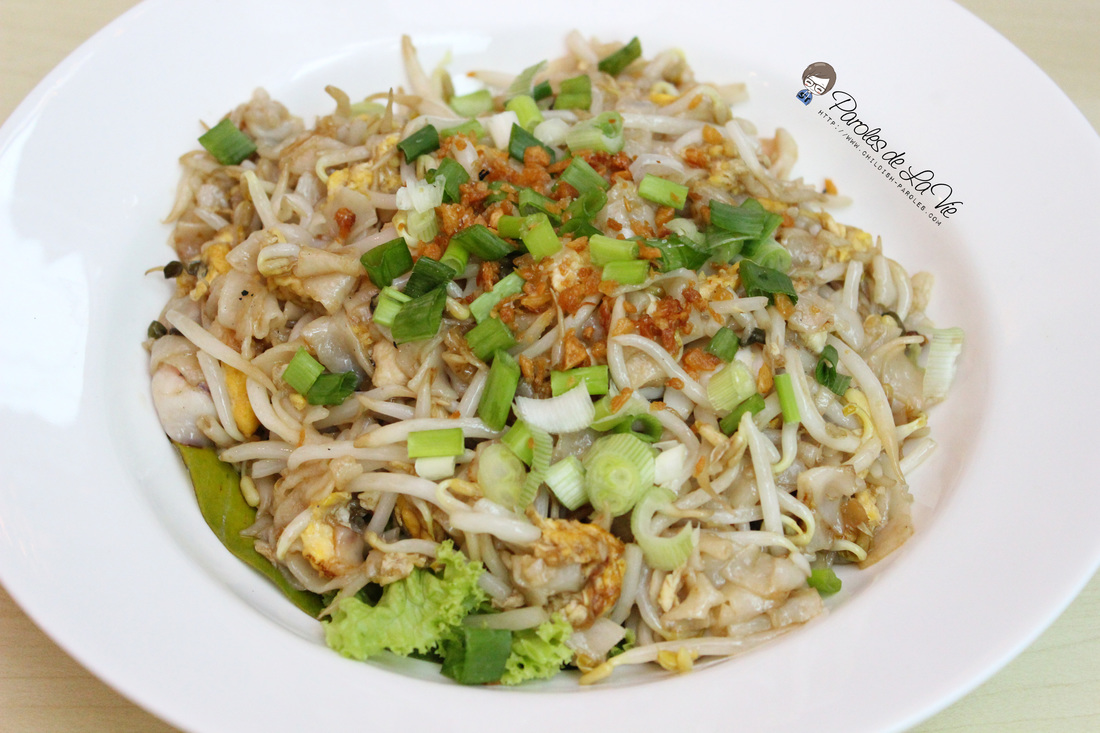 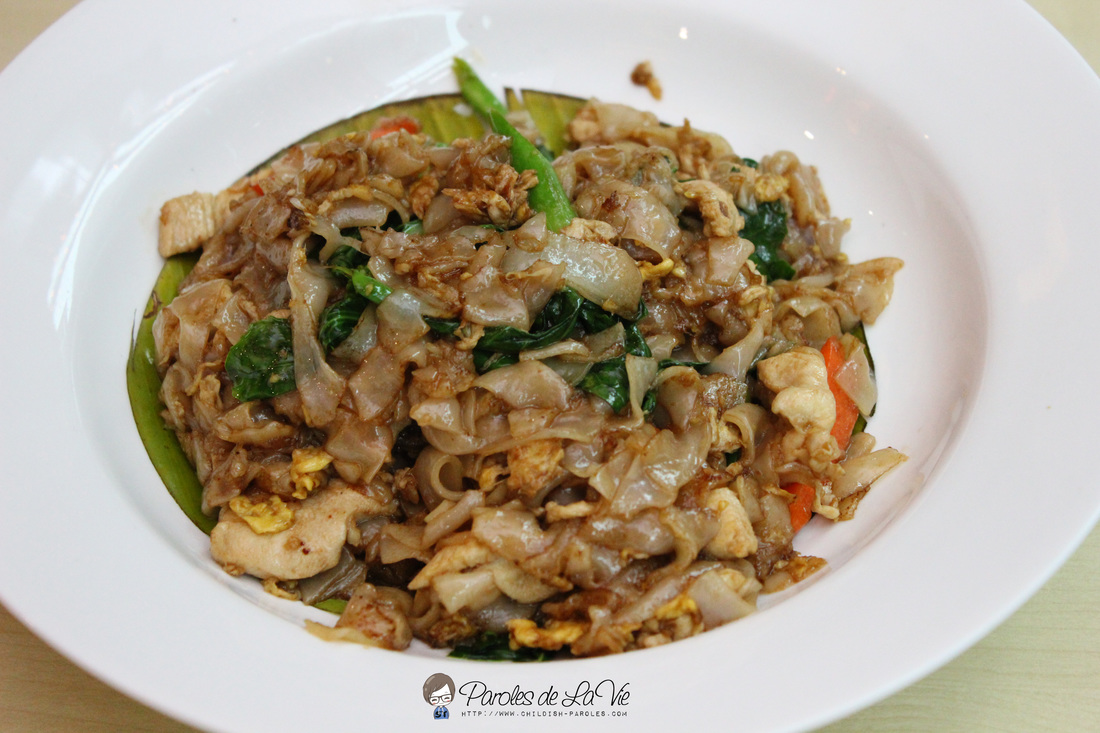 Fried Kuey Teow in Dark Sauce @ RM13
For glass noodle, I was in love with this Thai Style Claypot Glass Noodle with Prawns. The prawn was fresh and because it was served in claypot, this dish was hot. You should try it together with the dipping sauce, it was more flavorful.
Thai Style Claypot Glass Noodle with Prawns @ RM25.90
Although it was named as Stir Fry Mixed Vegetable, it was stir fried together with glass noodle. If you are tempting for more vegetable with noodle, you may consider ordering this dish. 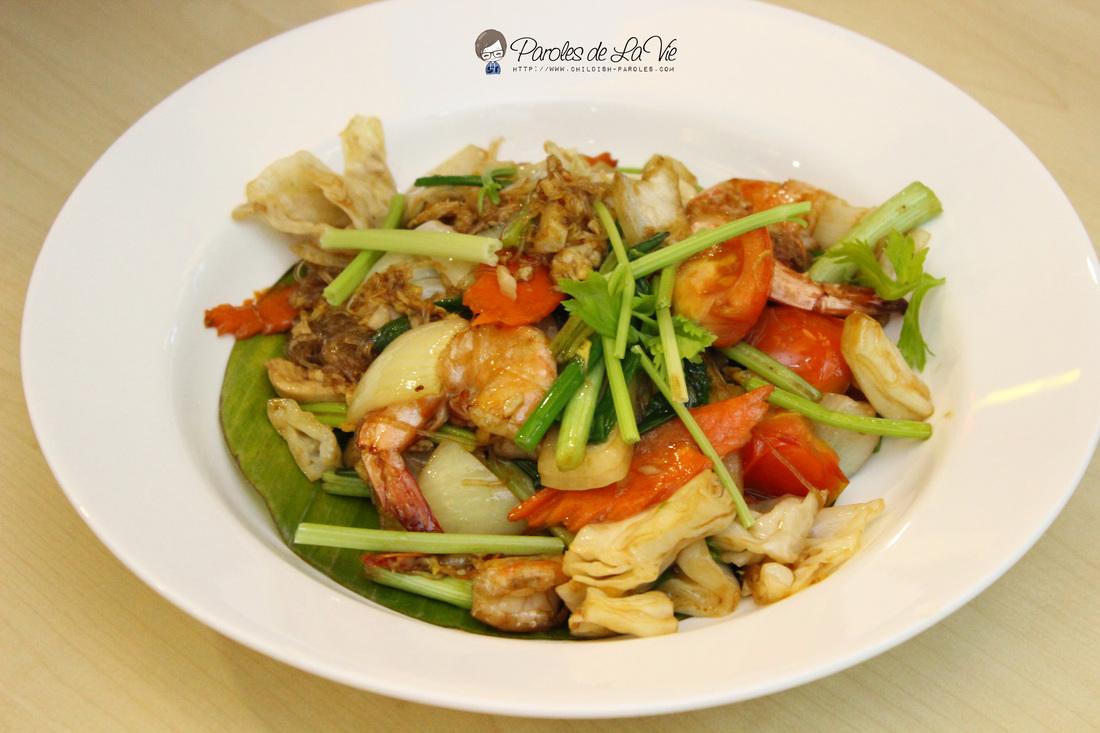 Stir Fry Mixed Vegetables @ RM14.90
Tom Yum Soup is a must when eating Thai cuisine. Cafe 9 served really savory Tom Yum Soup. It was aromatic and heavenly spread on the entire soup. Every ingredient in the soup was gastronomic. By the way, you can choose to have clear or red tom yum. Another soup you can try when dining at Cafe 9 is New Zealand Oxtail Soup. This is an option Cafe 9 offered to diner who is not a spicy eater. This soup was clear and light.
Besides, curry is also a specialty of Thai cuisine. We had two curry dishes, which were Green Curry Chicken and Panaeng Curry Chicken. Both were really hot and spicy; the owner claimed that they have already lower down the spice level. If you claim yourself are a hot spicy eater, let’s try their curry paste. Maybe you will redefine yourself. 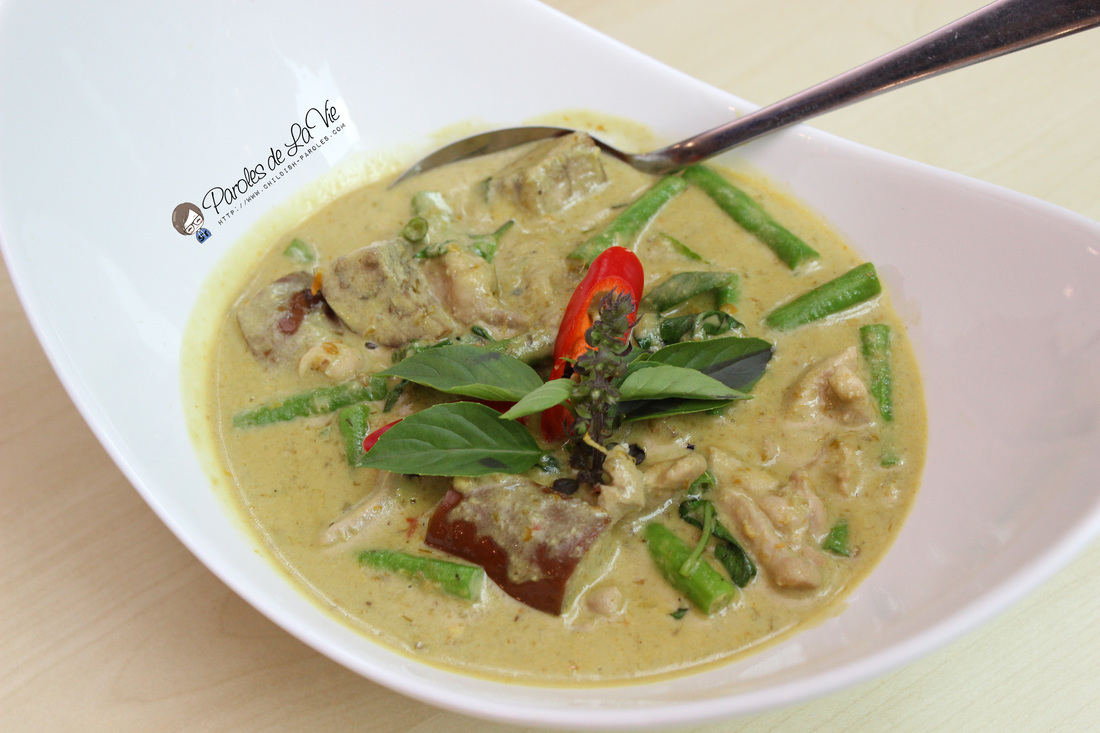 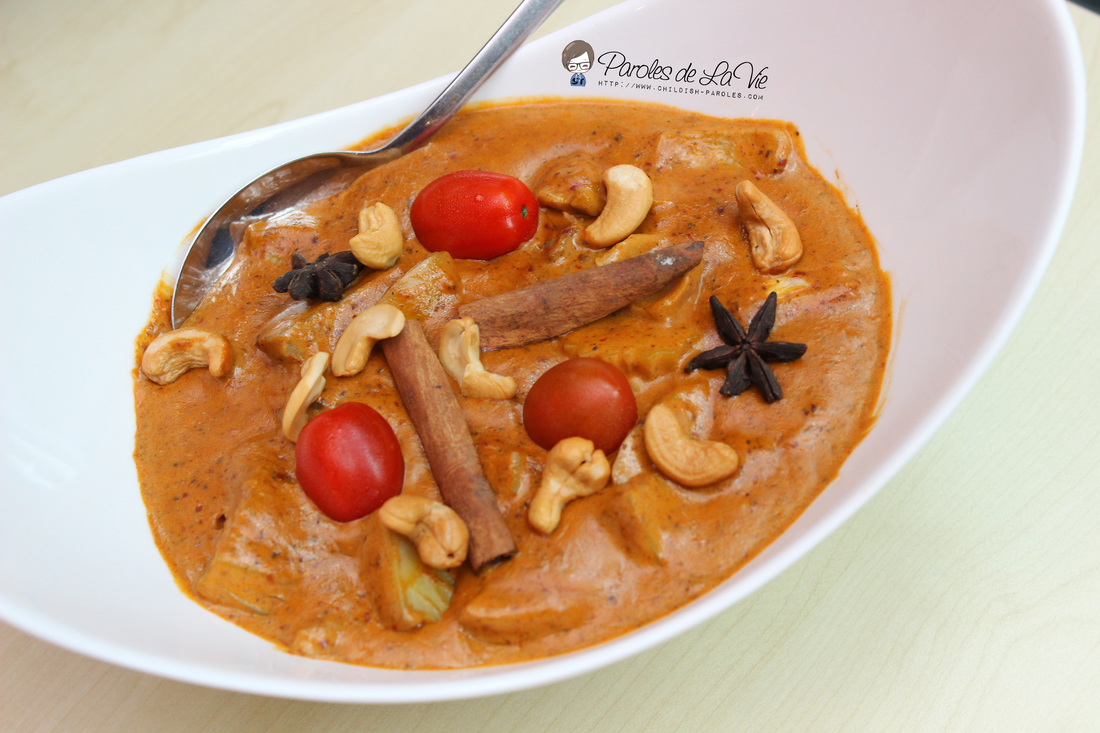 Panaeng Curry Chicken @ RM18.90
Dessert, Tub Tim Grob, was served after finishing all the dishes. It was made by red ruby water chestnuts in coconut milk. The coconut milk covered the entire dessert. When the ice melted, it seems to become coconut milk beverage. 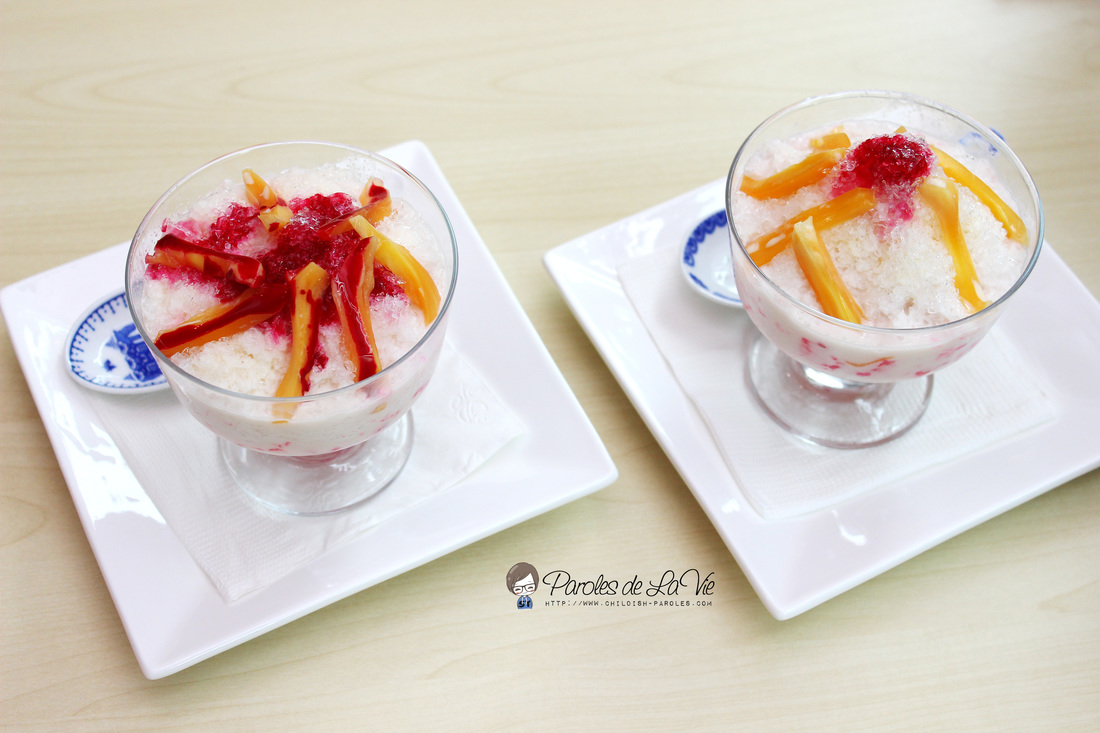