Birthday is always our big day. Everyone celebrate it differently. Last year December, during my dear’s birthday, I have given him an unforgettable celebration at Penang ESCAPE Theme Park. 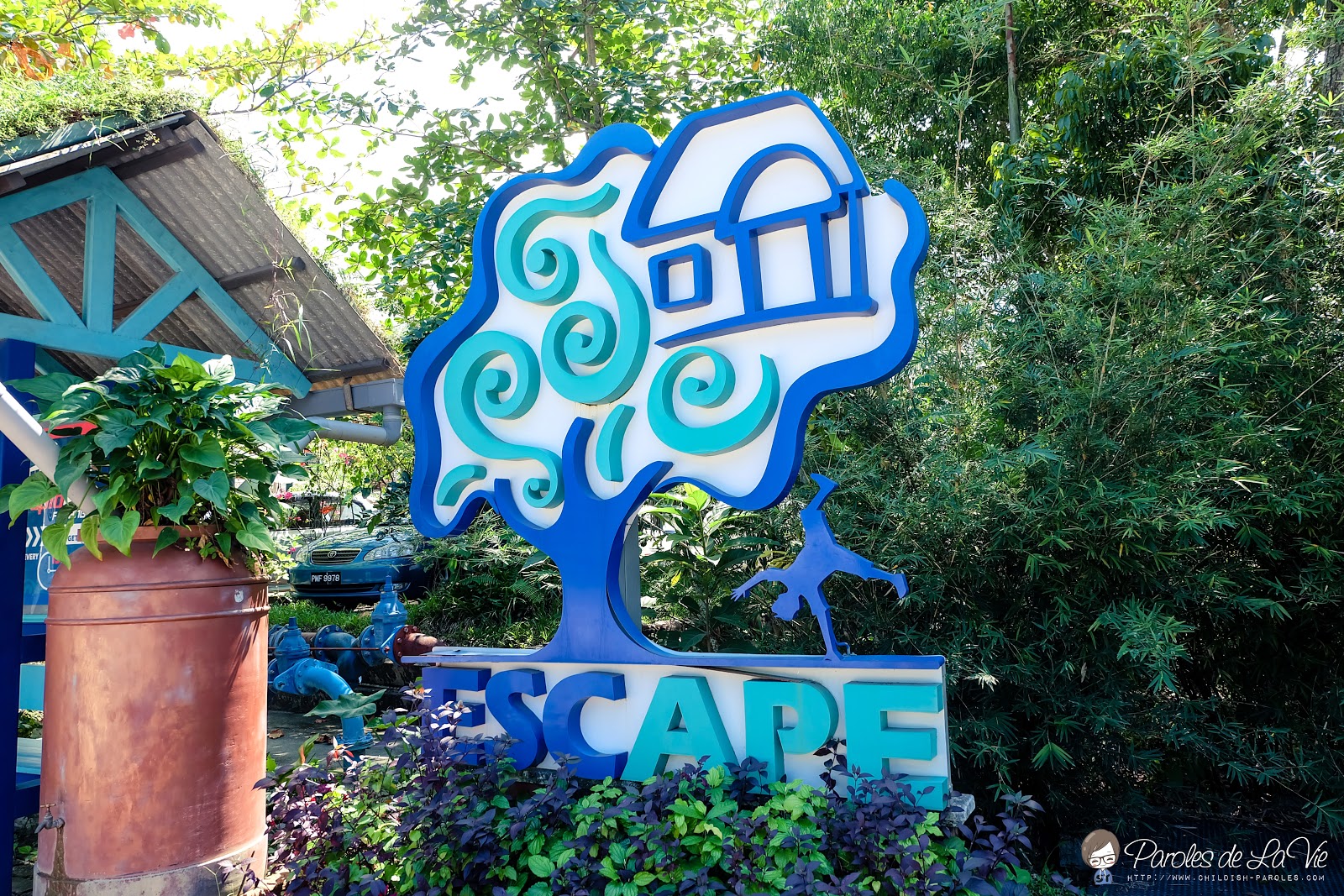 ESCAPE is an adventure play theme park in Penang. It is located at Teluk Bahang, few km away from Batu Ferringhi, at least 30 minutes drive from Georgetown. Hence, if you are not Penangnite and your main purpose is to go ESCAPE, I would suggest to book your stay at Batu Ferringhi because it is nearer and you can reach earlier. (You will know why you should come early later on…)
FYI, ESCAPE has no age limit to have fun. Games have a clear label which age group is allow to play which game. And of course, most games can be played by adults; while games for kids may require supervision from parents/guardians.

We saw highschool students having their holiday team building camp here. If you are seeking for a place for adventurous activities, contact ESCAPE for more information (details at the bottom).

Back to the point, Danny and I were there to celebrate his birthday. I personally have played some similar activities during leadership camp and NS; hence, this was not new to me. However, my beloved man, joined this the first time! That’s why it was a memorable birthday for him! 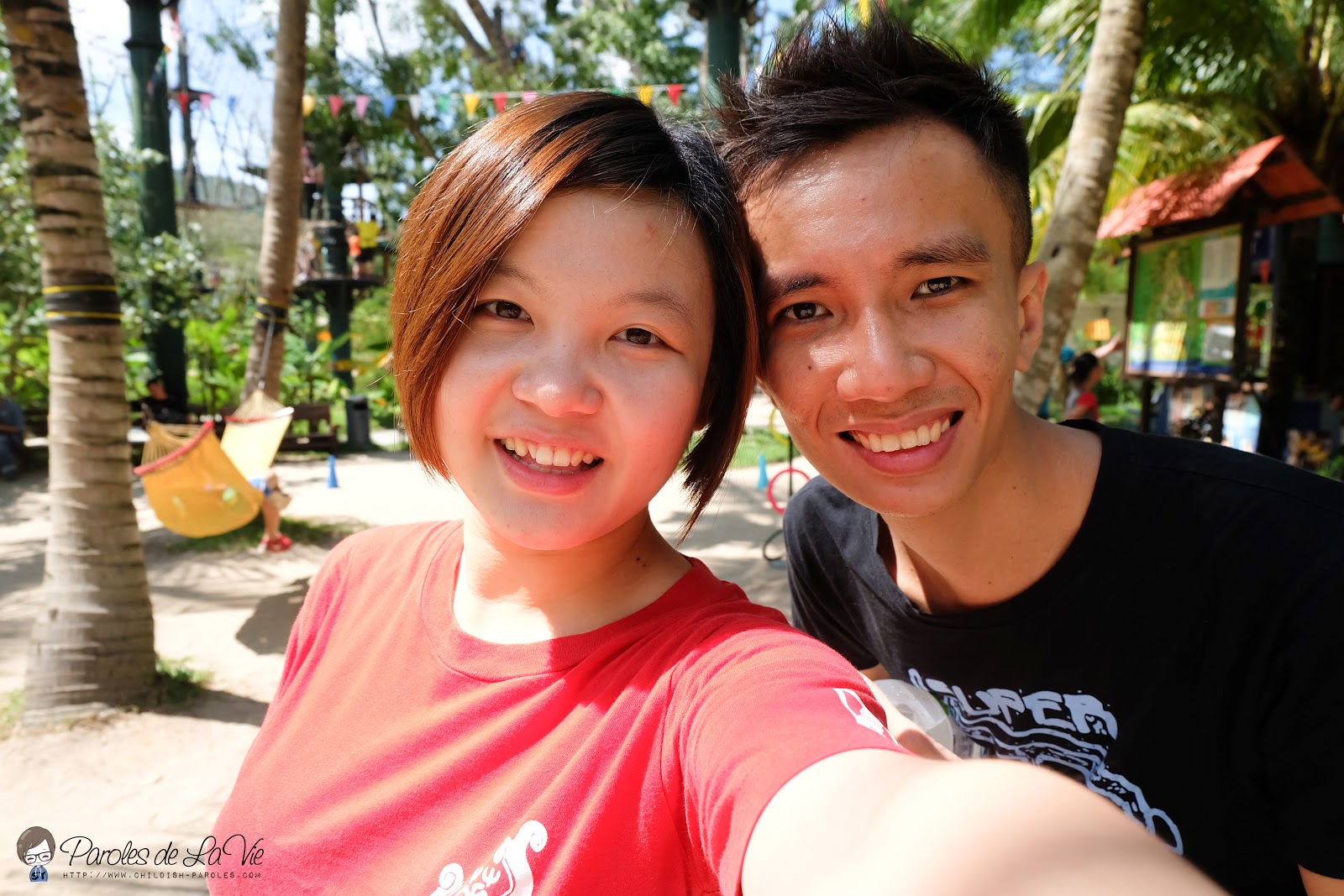 ESCAPE opens at 9am, and we reached there around 11am. However, we couldn’t get a parking; hence, we have no choice but to park at roadside. You probably can check out the free shuttle bus from ESCAPE website to avoid the parking issue. Entrance fee (called as ESCAPE passport) was RM83 per person, but we realised online ticketing was cheaper. I forgot whether it was 10% or 20% off, not sure whether this promotion is still ongoing.
Also, you probably have to rent a locker, which you have to pay RM15. Meanwhile, it is cashless transaction in ESCAPE; therefore, you are required to topup your temporary e-wallet with a minimum of RM30. No worries, remaining balance will be returned to you at souvenir shop counter. The reason everything goes cashless is to avoid issue such as wallet lost while you are having fun. A pin code will be given to you to unlock a locker and to purchase food and drinks in ESCAPE. Overall, the only thing you have to take care of is the receipt which included the pin code, unless you have remembered it in your brain. Else, you may have hard time to unlock your locker or purchase food and drinks.
Now, let’s check out what games we have played at ESCAPE! Basically, every game needs to queue. Just whether it is long or short. The first game was Atan Leap. I would said it was like beginner level of bungy jump. Player will jump from a tall tower! Wow!!! It was so exciting yet frightening when we wanted to jump. Danny said why I brought him to this super challenging activity at the first place without a warm up. Well, I was just too excited! Haha~ 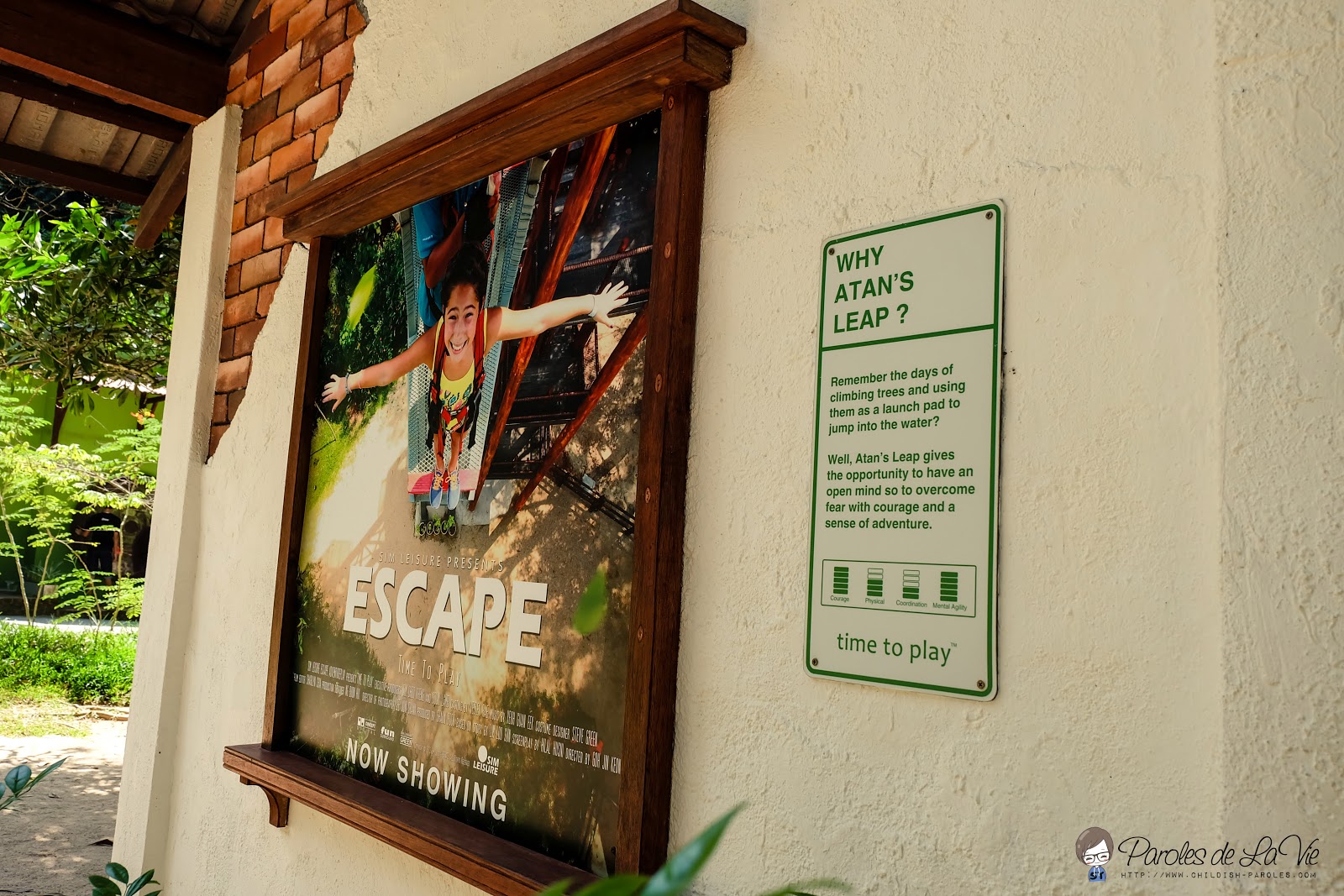 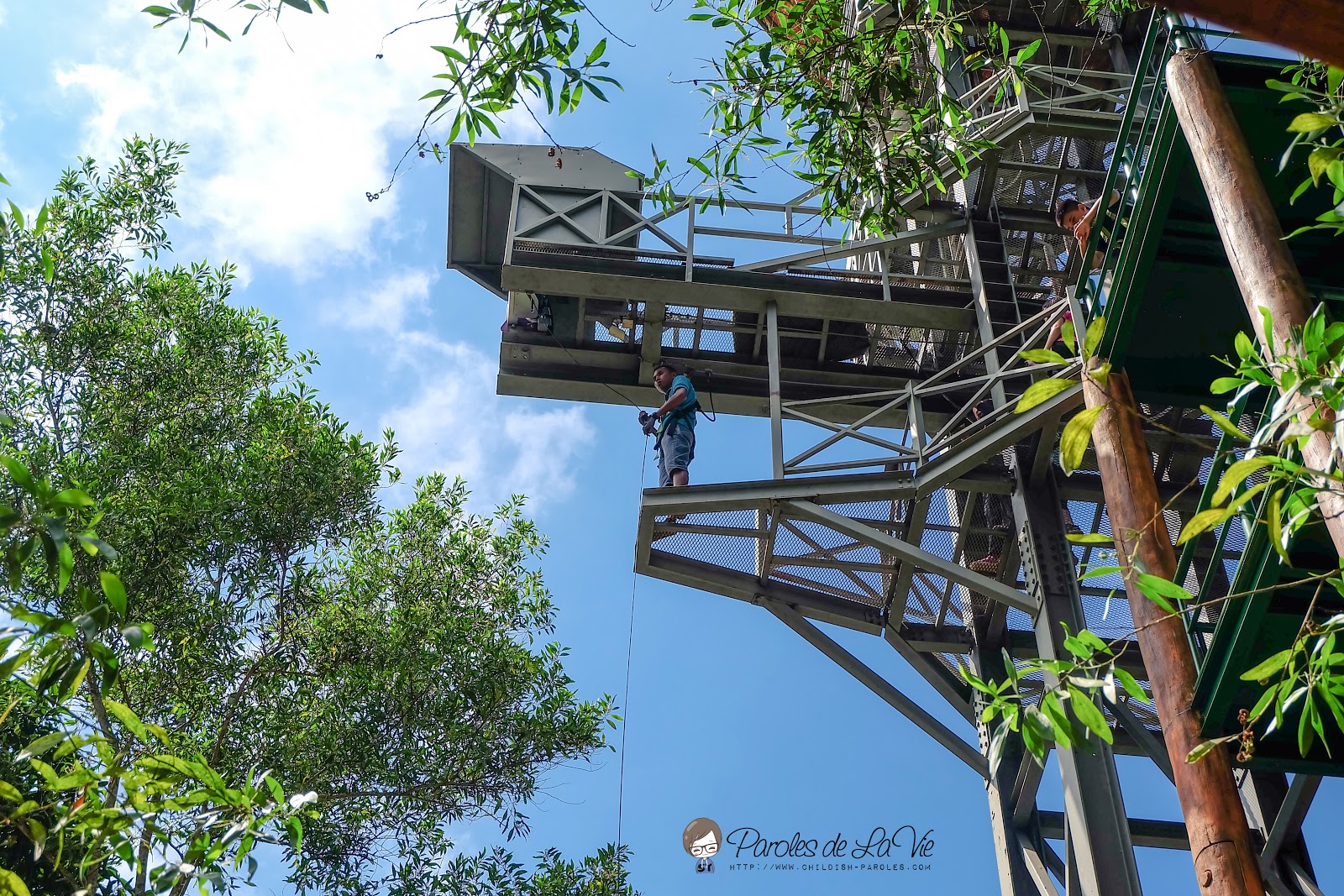 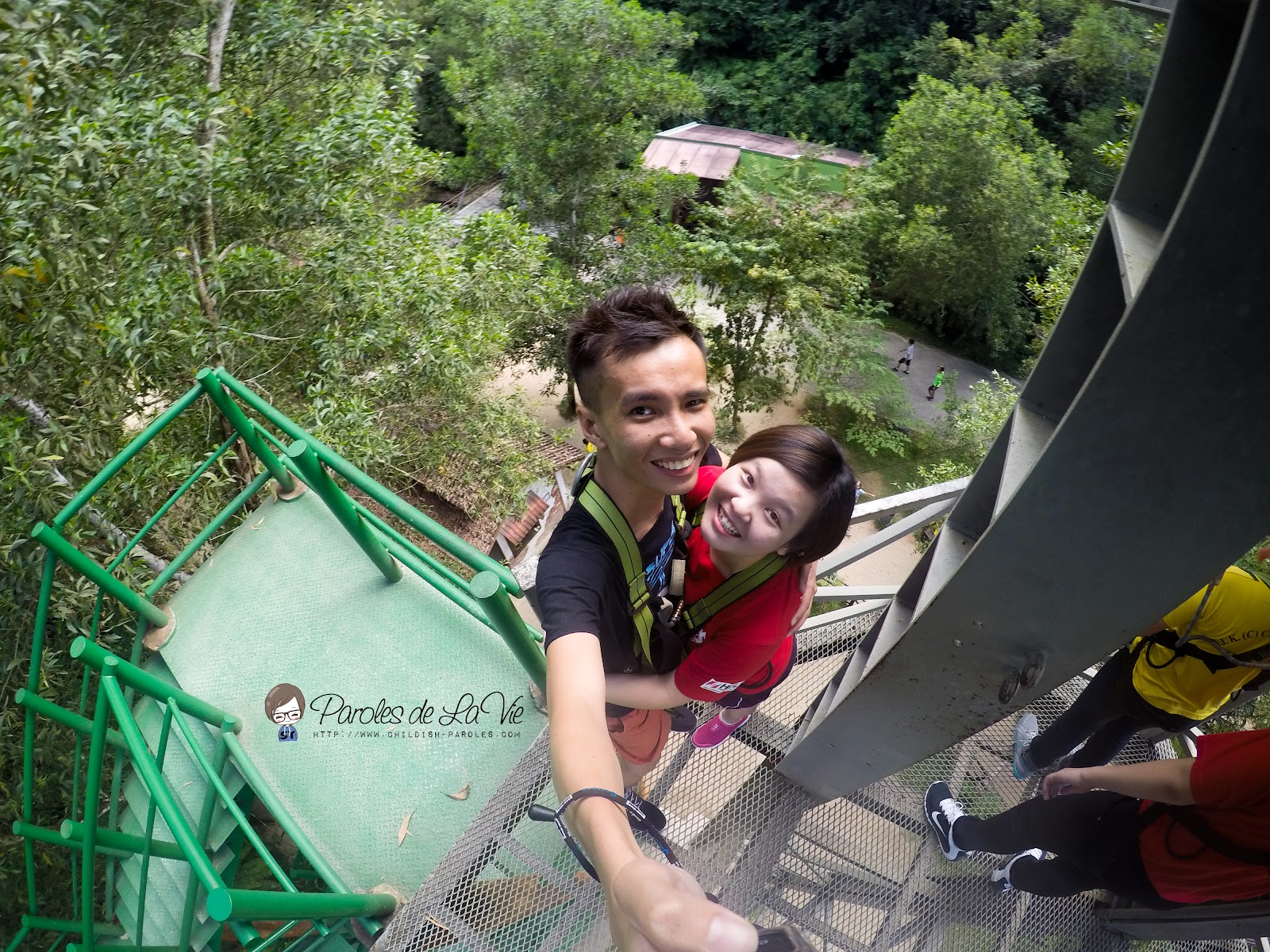 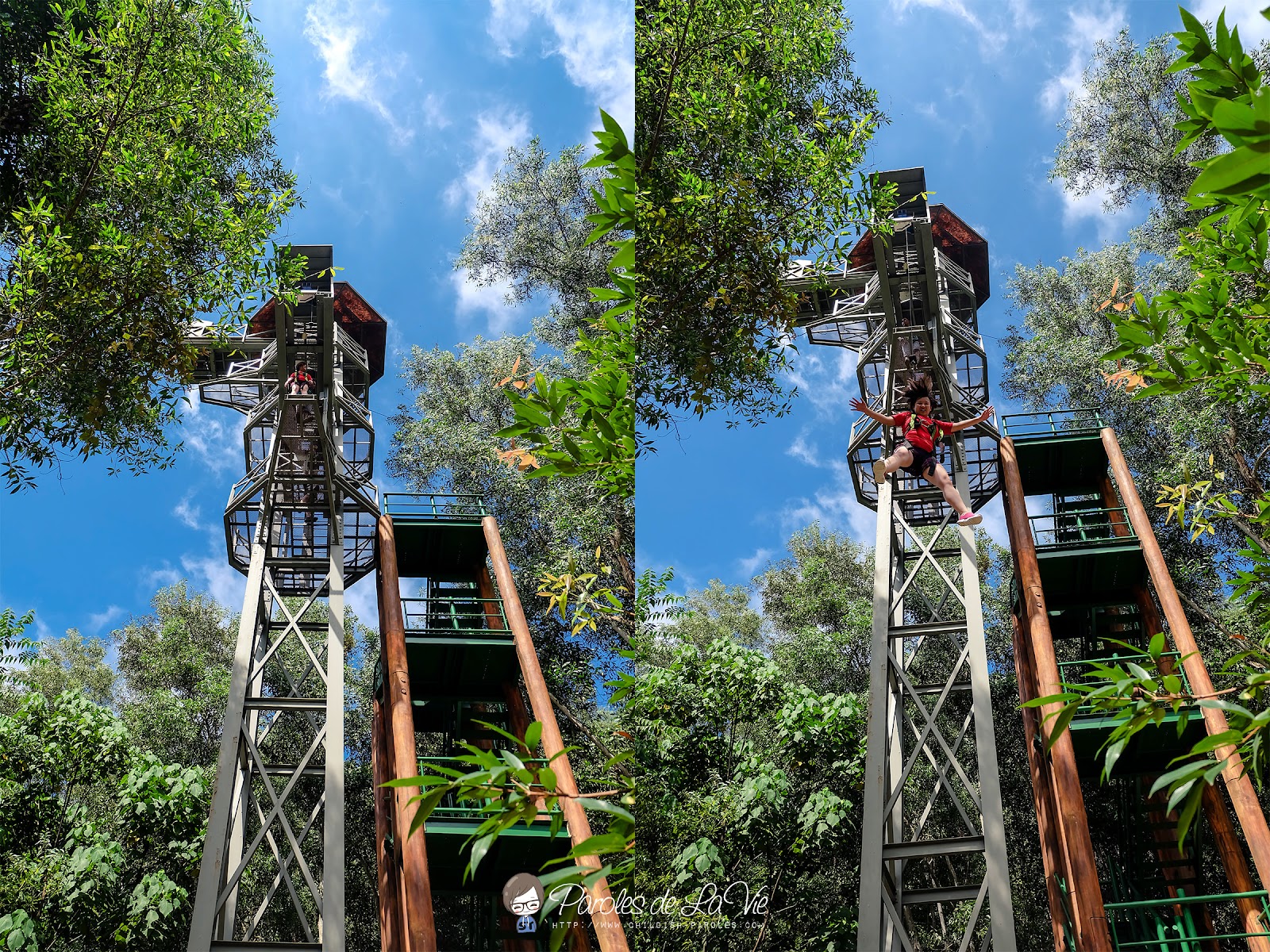 Birthday boy was trying to challenge the hardest game in the park – Balance Beam. The crew told us that only one person successfully go and back! 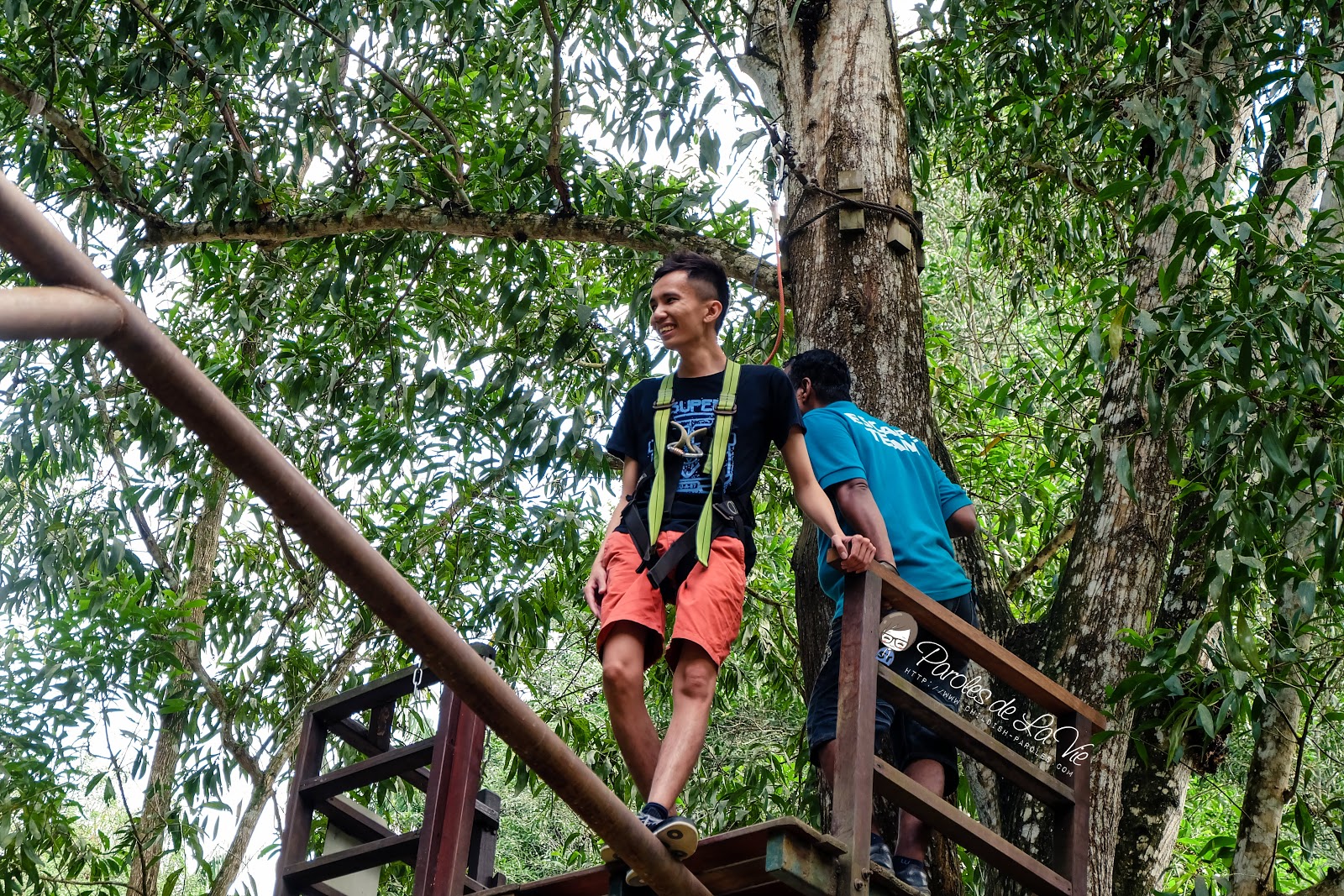 Want to be Tarzan? Check out Jungle Swinger… It was so difficult to capture non-blurry photo when swinging. 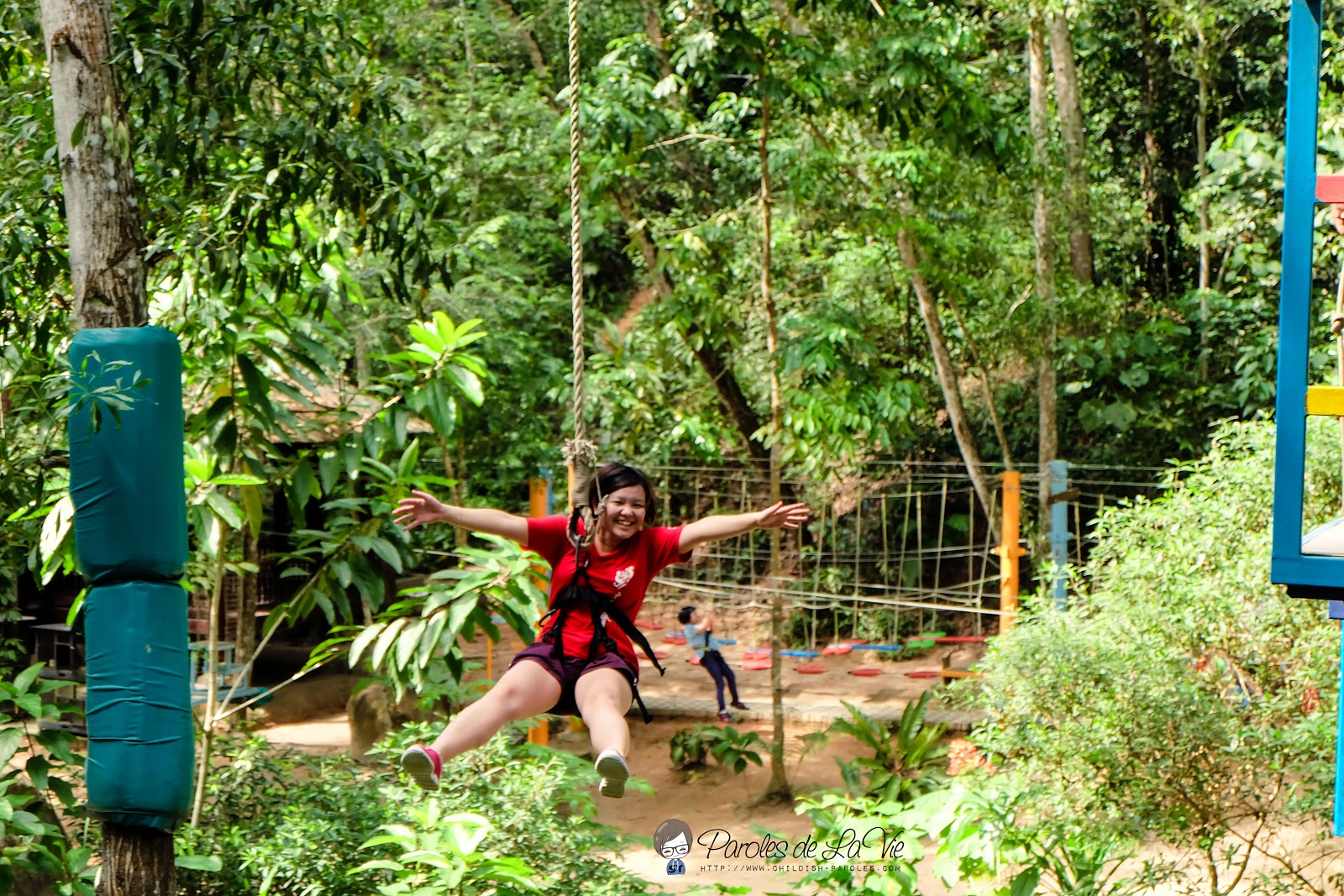 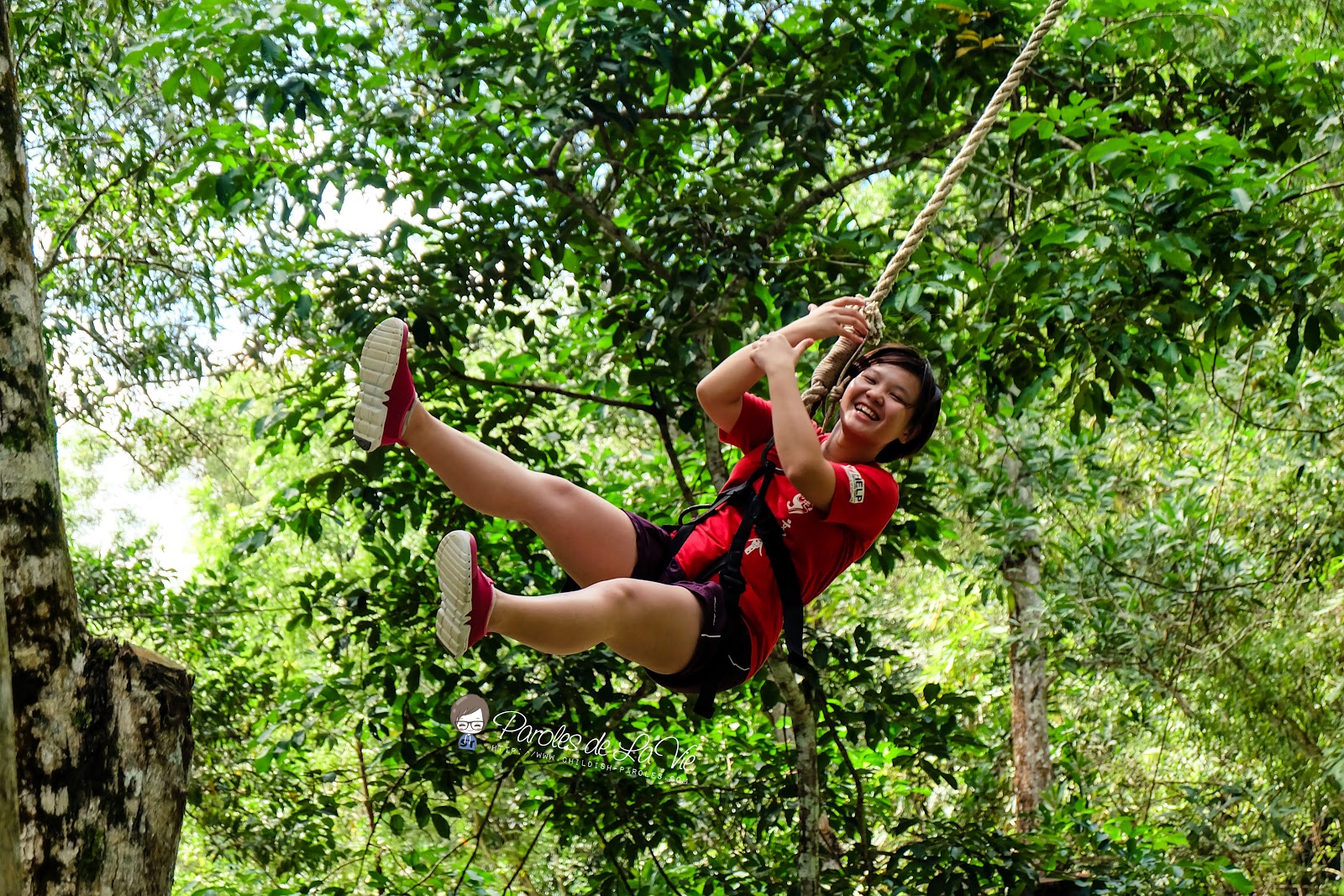 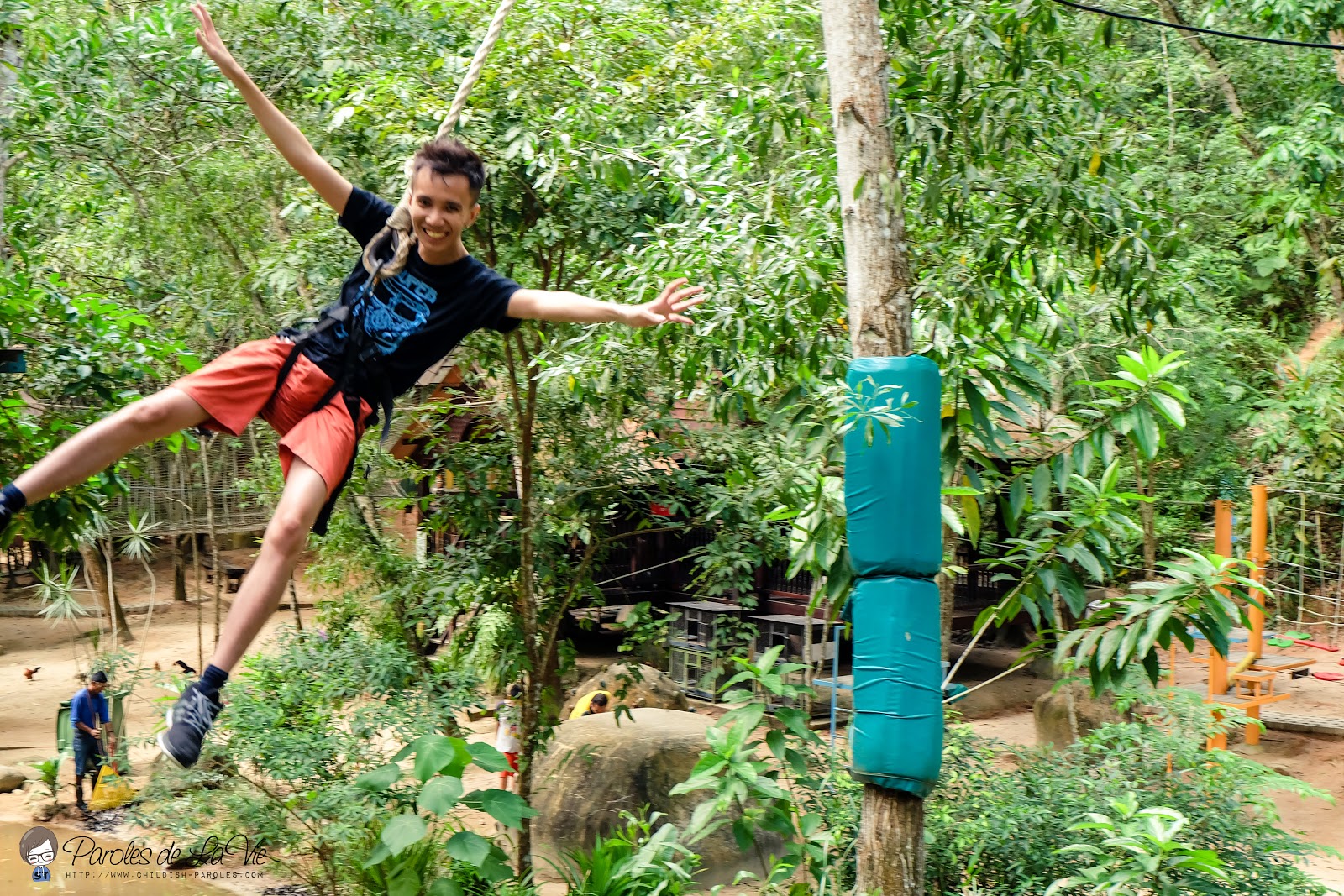 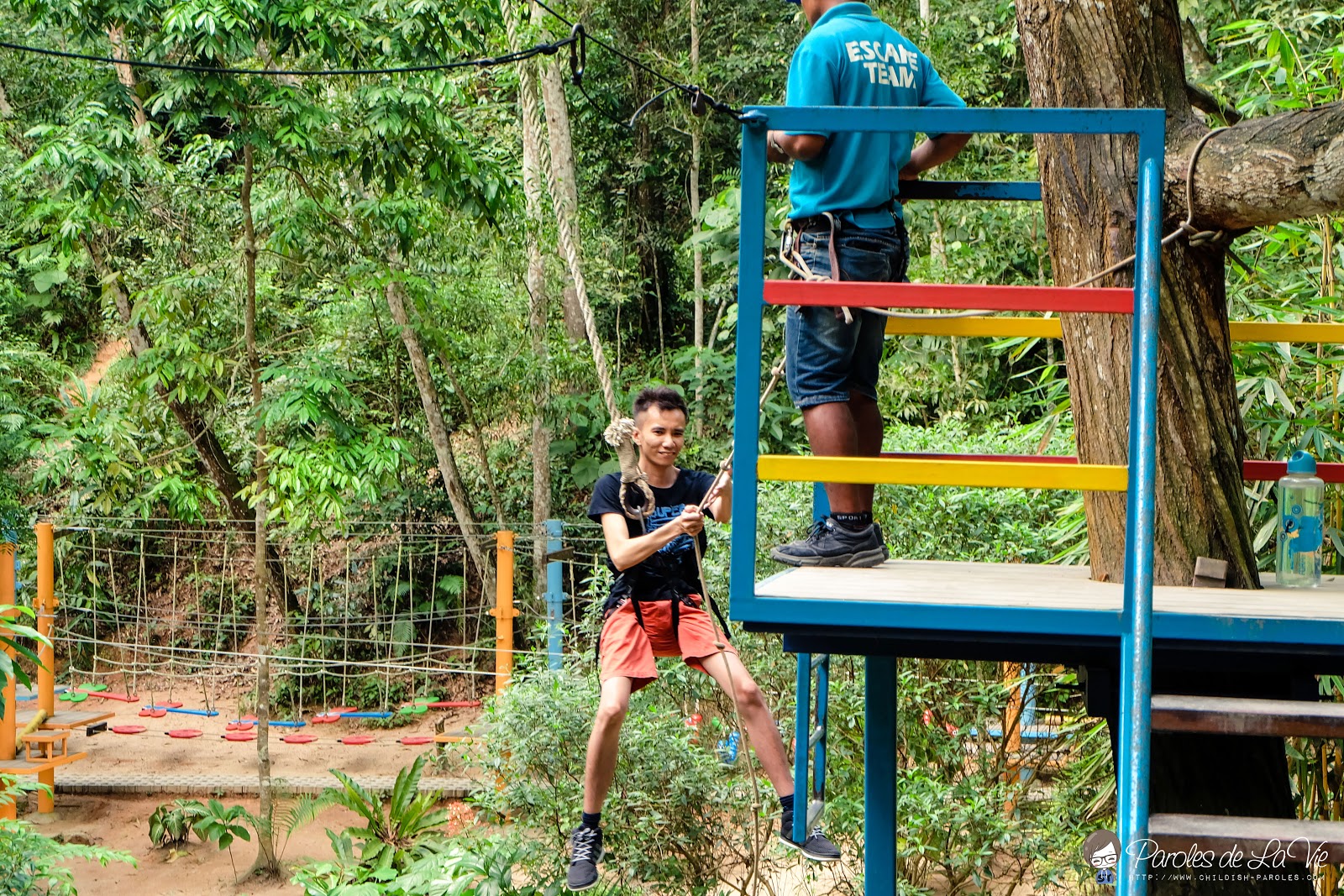 Ha! We both were saying we wanted to climb a tree, at least once in our lives. We did that with Go Ape. It was quite challenging for people who less exercise. If you felt tired in the middle, you either hug the tree to rest and continue to climb up, or you just gave up and jump down. Be sporty guys! Finish it! It is an accomplishment! 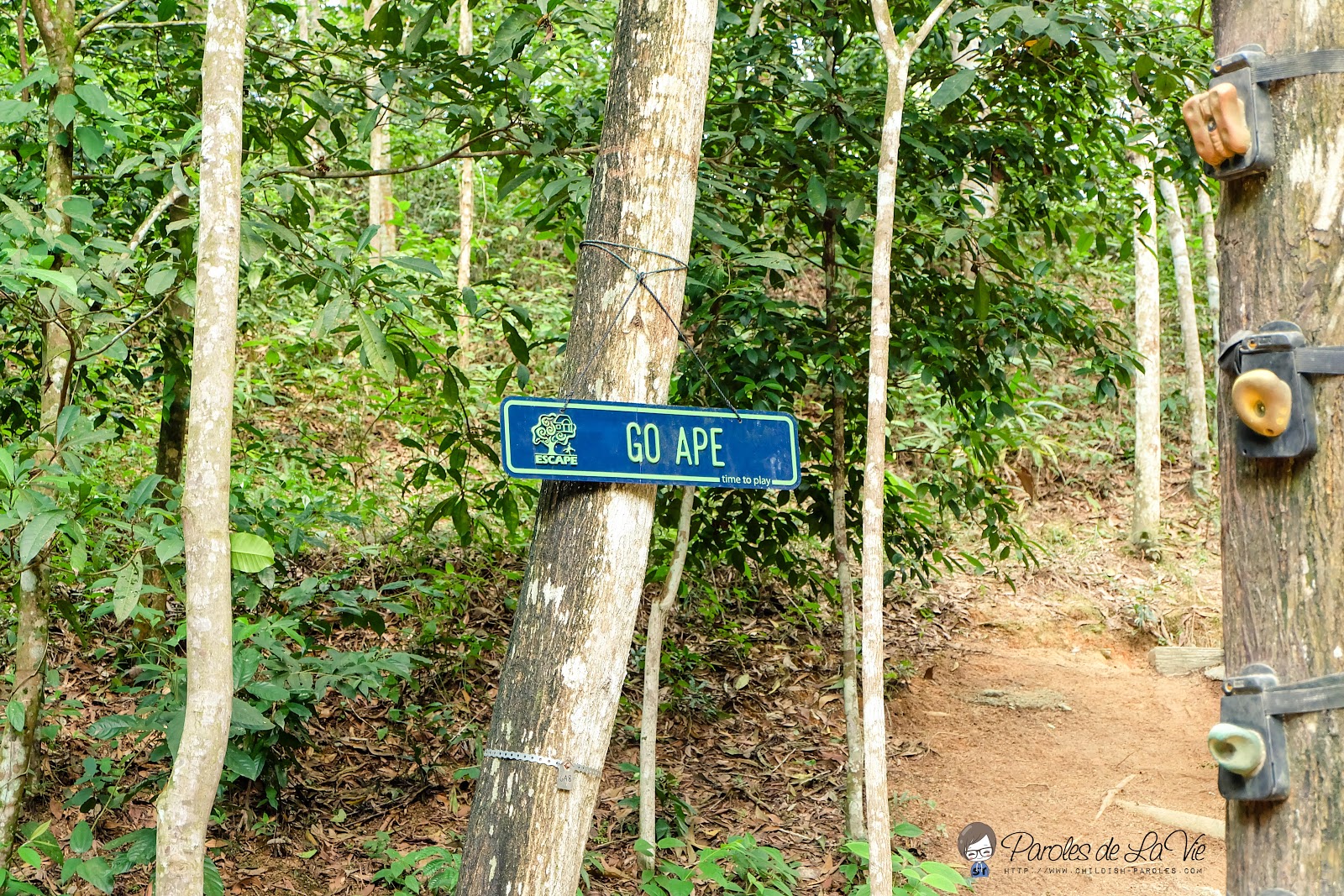 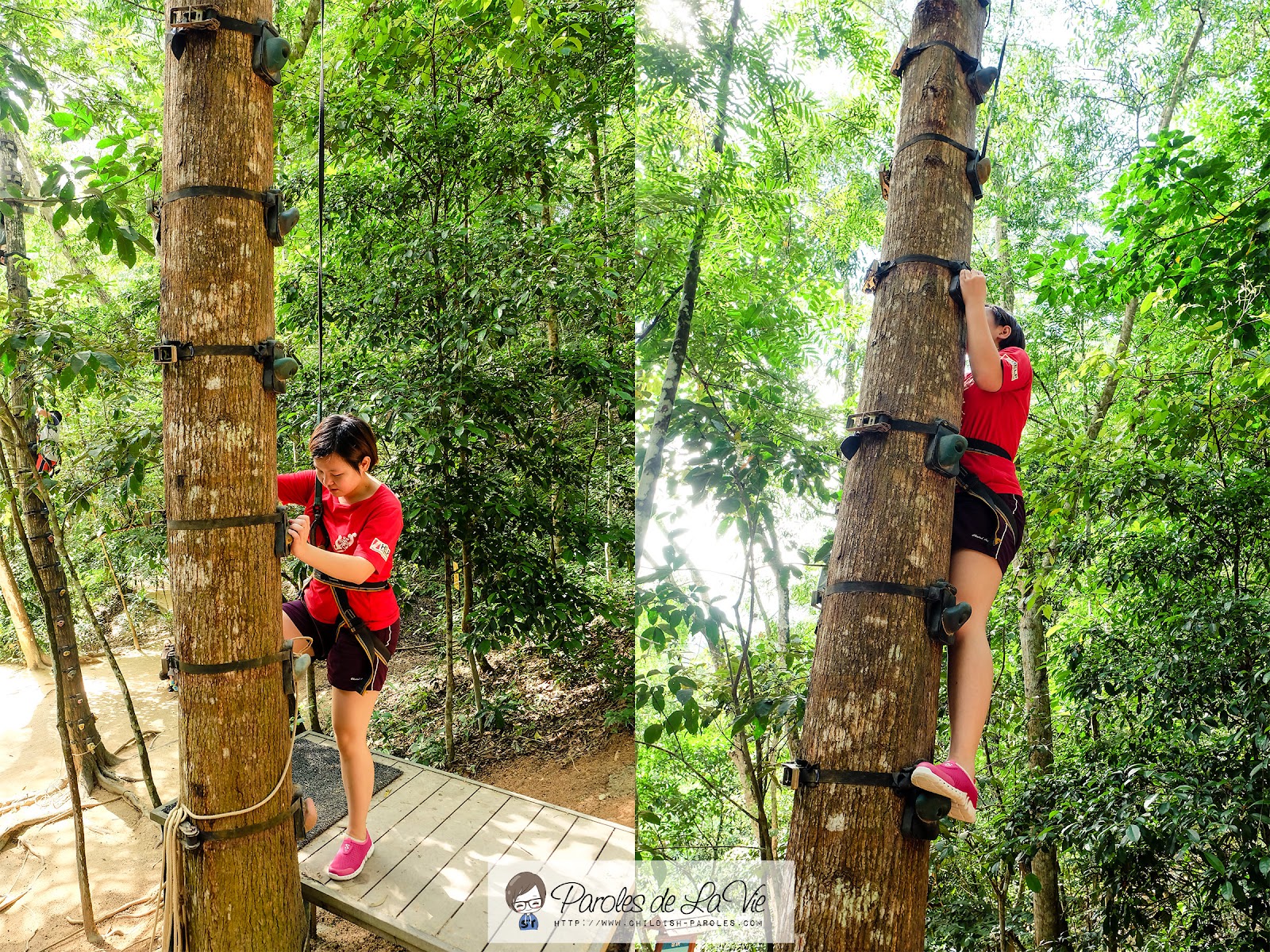 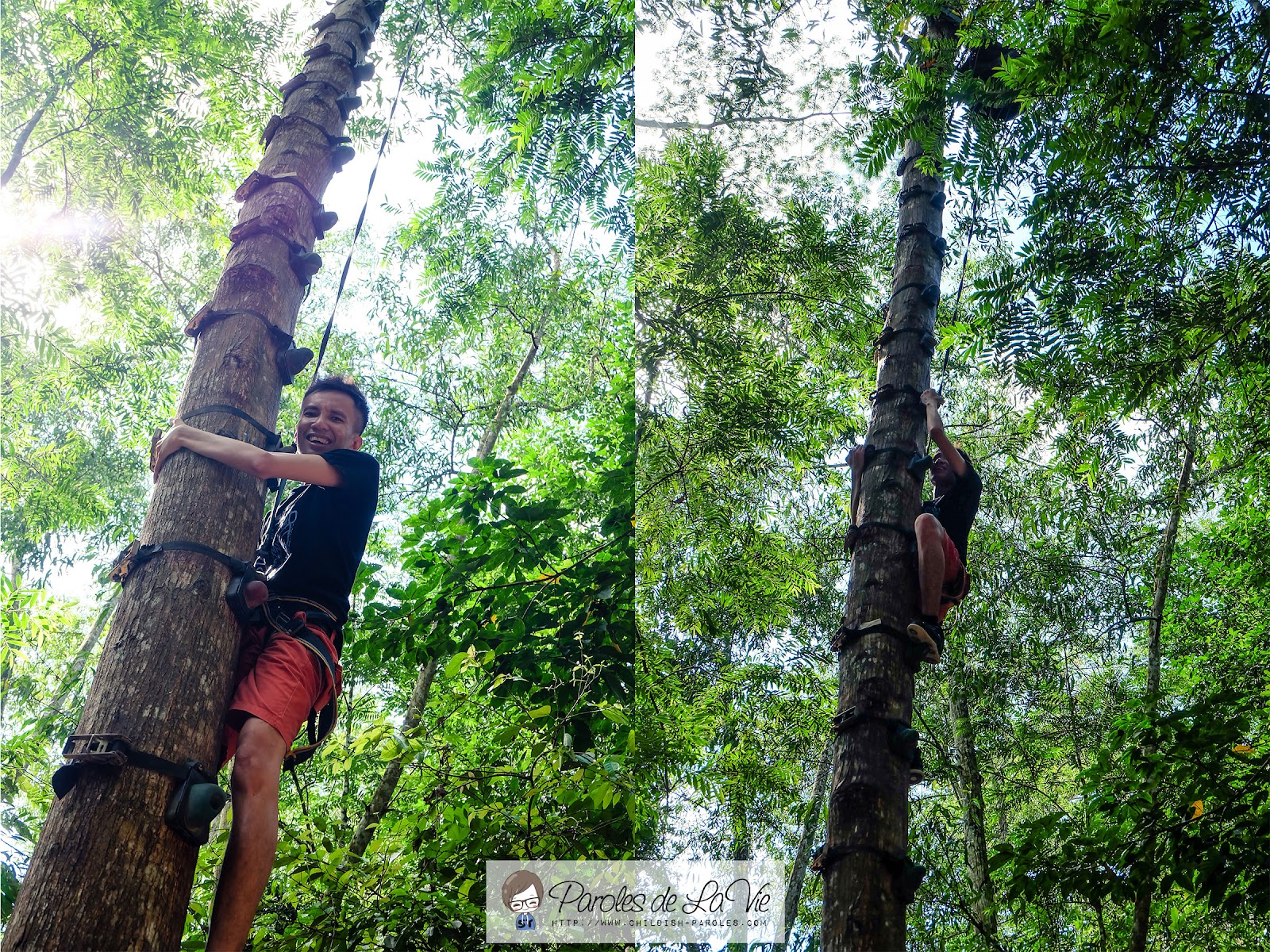 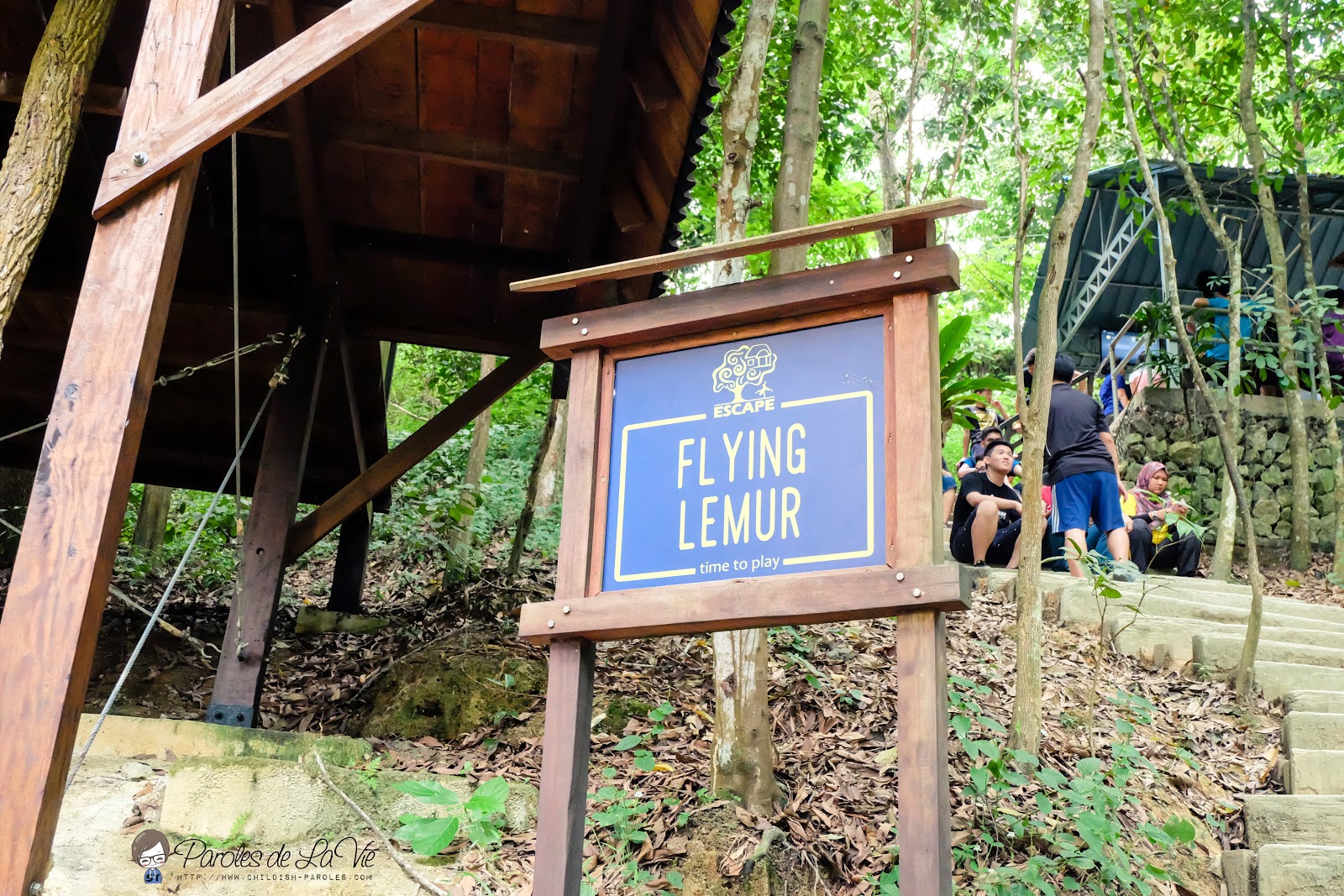 We ended up our adventure with fun Tubby Race. 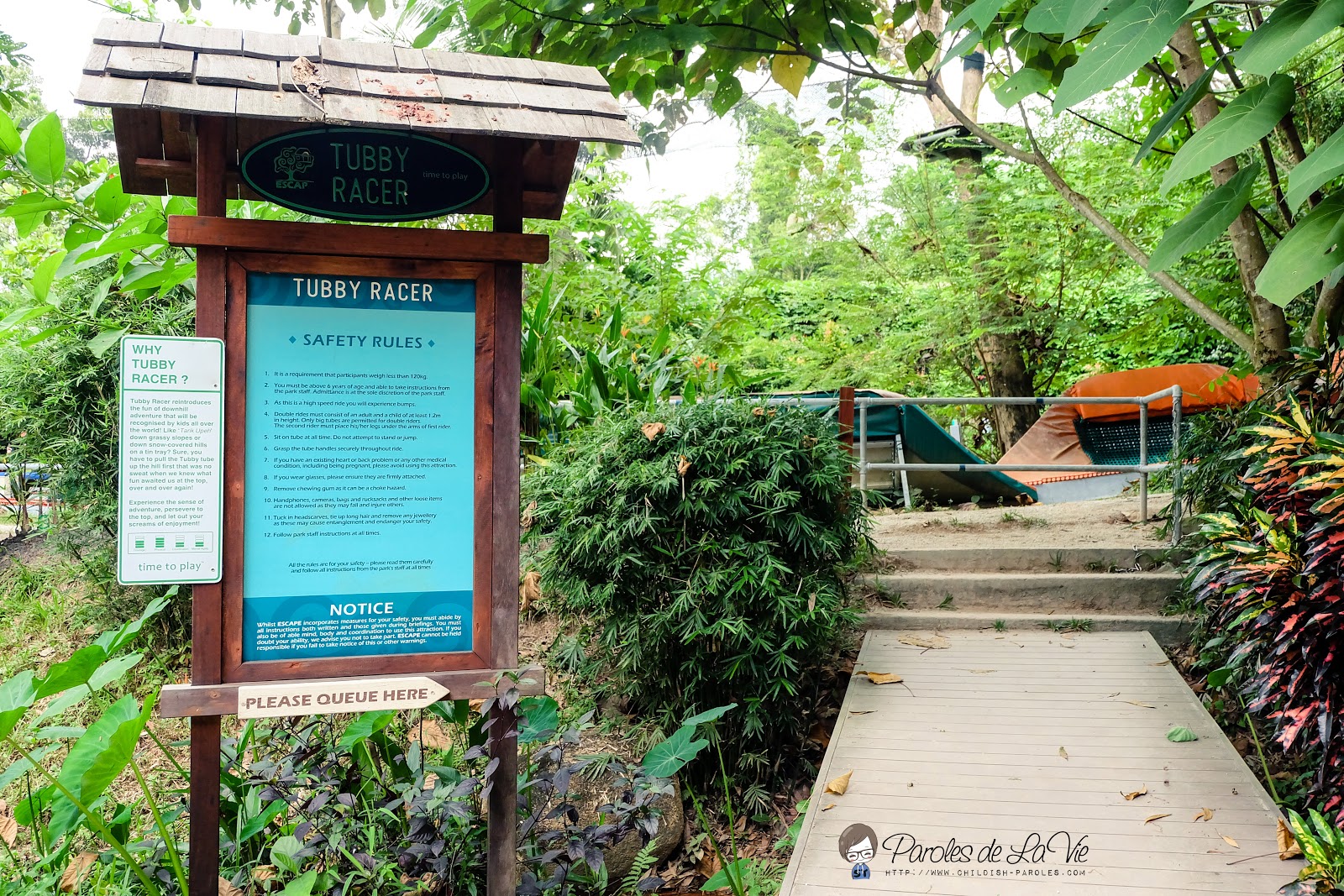 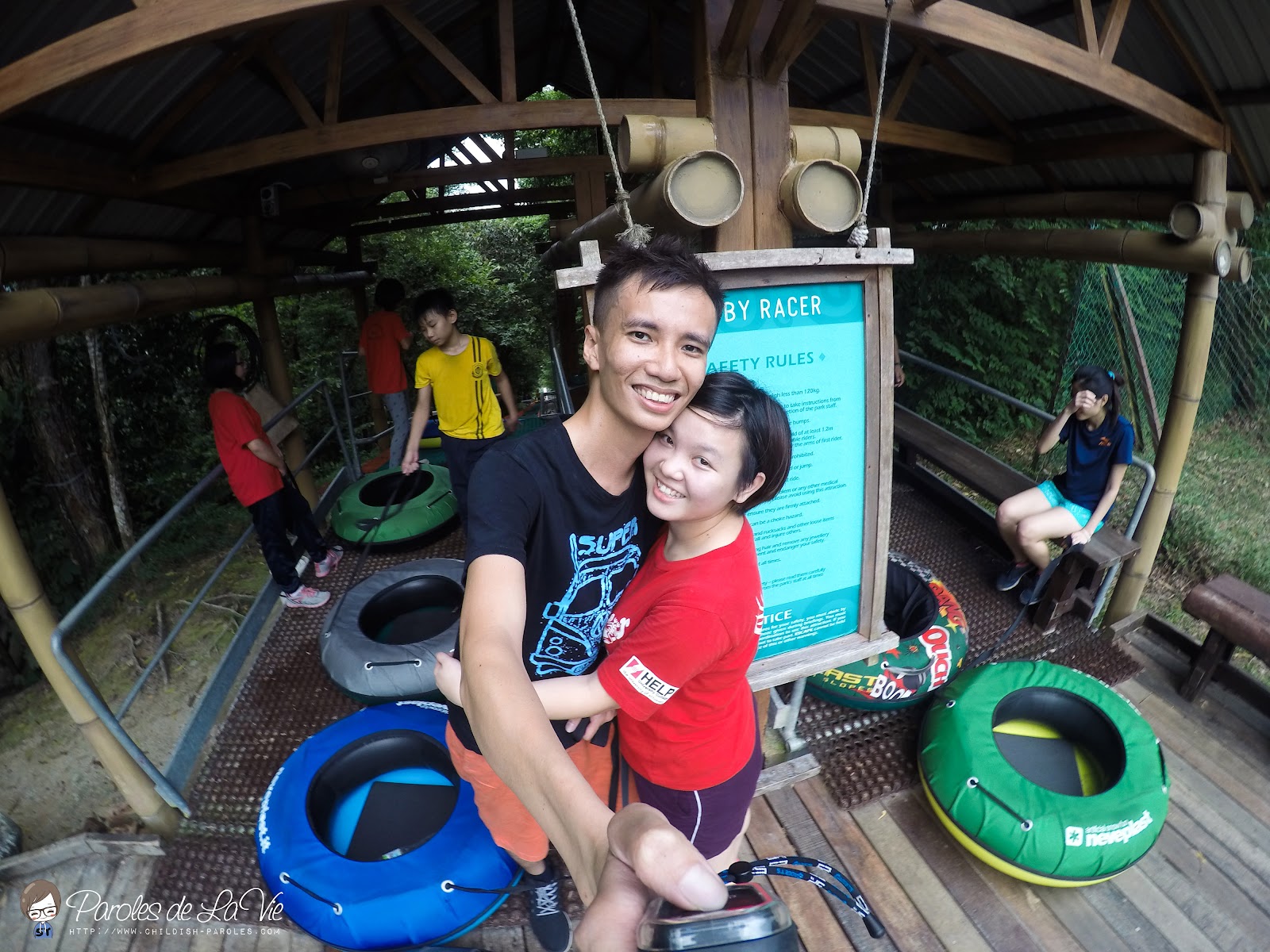 Watch the following video, you will know how fun was it!
DS 出走咯！ – Tubby Race | Facebook
It is estimated one needs at least 6 hours if he/she wants to play all the games. However, I think this estimation was long time ago when it was not so crowded. You have to queue for playing each game, time killed a lot, that’s why you are recommended to come earlier! Else, you can’t play as much as you can. If you think one day is not enough, you can buy a 2-day pass. Check out more details on their website.
Last, my personal advice… Bring action camera if you have one, normal camera isn’t recommended unless you have a personal camera man who in charge to take photo only. Else, there is “hidden photographer” in the park. They will capture precious moment and upload it on ESCAPE FB Page. However, it depends on luck too because I can’t find any photo of ours from their page.
All in all, every information you needed about ESCAPE can be found on their website. If you still have other question, you can call them. Or you can shot me a message. I am happy to lend you a hand if I know it.
Penang ESCAPE
Address: 828, Jalan Teluk Bahang, 11050 Penang.
Tel: 04 – 881 1106
Website: http://www.escape.my
Facebook: escape.my
中文：http://www.dsfoodtravel.com/2016/02/penang-escape.html